Law enforcement authorities are seeking out 'enablers' of money laundering for prosecution, the minister responsible told solicitors today - warning that 'not just the major criminals' will be targeted. 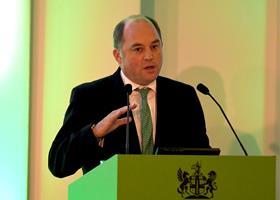 Wallace: 'If it fails the sniff test, do something about it'

Ben Wallace MP, minister of state for security and economic crime, was speaking publicly for the first time since revealing a new crackdown on estate agencies, private schools and other organisations suspected of handling dirty money adding up to £90bn a year. ‘We are going to seek out enablers to prosecute, to show it’s not just the major criminals but those who in the past have been hidden by the noise, by the traffic,’ Wallace told the Law Society's Anti-Money Laundering and Financial Crime Conference 2018.

He warned the regulated sector that 'if a transaction fails the sniff test, you should do something about it'. However, unlike in previous statements, he did not specifically single out solicitors as enablers of crime. He also promised that, following criticism from the Law Commission, the suspicious activity reporting (SAR) regime would be reformed with a focus on 'quality not quantity'.

Wallace also said that the government expected more legal battles over unexplained wealth orders. ‘This is a new tool. We have to test the courts and get used to it. Some of the people we are interested in have very deep pockets and will challenge it at every stage.’ More such orders will be on the way, he said. ‘We will send the message that if we can’t get you, we’ll get your assets.’

On the use of corporate structures to obscure ownership of assets, Wallace revealed that registrations of Scottish limited partnerships - which under Scots law have legal personality - had dropped by 70% since the government announced it was investigating their use. ‘It is remarkable how many people from Eastern Europe and Ukraine were interested in Scottish limited partnerships,’ he said.

Meanwhile Crispin Passmore, executive director of the Solicitors Regulation Authority, told the conference that the sector could expect no let-up in scrutiny from the regulator. Following the SRA's thematic review in March 'I'm a little bit more concerned than I was,' Passmore said. He revealed that the SRA is applying artificial intelligence to detect firms most at risk of laundering money.

In the year ahead the SRA will concentrate on trust and company issues as well as conveyancing, Passmore said. He warned: 'It's not enough just to tick the [compliance] boxes: we're looking at you really knowing who your client is, where their money comes from and that you understand the risk.'

He noted that law enforcement agencies consider the legal sector to be 'rubbish at doing SARs'.