The firm of a senior partner exposed over a LinkedIn email to a female barrister has refused to say if it has taken disciplinary action against him.

Barrister Charlotte Proudman this week published the email conversation between herself and Brown Rudnick partner Alexander Carter-Silk, in which he said: ‘You definitely win the prize for the best Linked in (sic) picture I have ever seen.’

The email, confirming a connection on the site, had begun by saying: ‘I appreciate this is probably horrendously politically incorrect but that is a stunning picture.’

Proudman replied by calling his email ‘unacceptable and misogynistic’ and posted the exchange on Twitter.

A spokeswoman for international practice Brown Rudnick said the firm is aware of the comments made on a private social media account.

Asked if any sanction had been taken against Carter-Silk, she added: ‘We have apologised for the offence caused and have no further comment to make.’

Proudman received support through social media for her stance after the story went into the national media. But she also reported derogatory comments in response to a Twitter enquiry about how many women are contacted because of their physical appearance rather than professional skills. 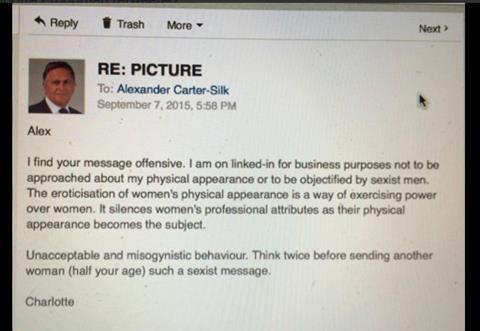 The message Proudman sent to Alexander Carter-Silk in reply

This morning she tweeted: ‘Will endure misogynistic backlash that accompanies calling out sexism in hope it encourages at least 1 woman2feel she doesn’t need 2 take it.’

Proudman is reported to have contacted the chief executive of Rudnick Brown and also plans to refer the matter to the Solicitors Regulation Authority.

Speaking to website RollOnFriday, intellectual property expert Carter-Silk said his comment was aimed at the ‘professional quality of the presentation on LinkedIn which was unfortunately misinterpreted’.