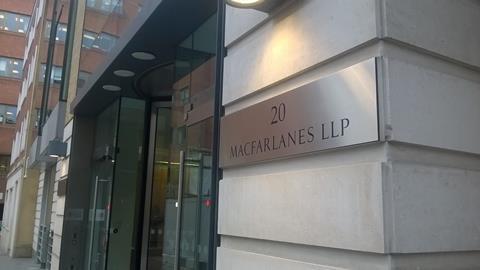 City firm Macfarlanes has reported that it increased payments to managers in the same year that profits took a sharp dip. According to financial results for the year ending 30 April, 2016 Macfarlanes LLP paid ’key management in the group’ a collective £4.3m – an increase of 10.7%.

The corporate firm Macfarlanes had enjoyed a stellar year in 2014/15, outperforming the magic circle and posting some of the highest partner profits of any City outfit.

In a statement, Macfarlanes said the remuneration figure in its 2015/2016 accounts includes the compensation of a group of key personnel, some of who are partners.

‘As far as the fall in profits is concerned, we have been consistently clear that 2014/2015 was a standout year for profitability,’ the firm said. ‘Accounting practice requires partner remuneration to be reported according to the year in which it is allocated.

‘Therefore the remuneration for partners within the group reflects the balance of the higher profits in 2014/15 which were not allocated in the accounts for that year but were required to be allocated in 2015/16. The profit shares of the partners in the group fell in line with profits as you would expect.’

Profit for the financial year available for division among members dropped from £51m in 2015 to £44m this year. The average number of members was 83 during 2015/16.

The amount of profit attributable to the member with the highest entitlement fell from £2m to £1.76m.

Macfarlanes announced six new internal partner promotions in April this year, although senior partner Charles Martin admitted the group was ‘uncharacteristically and disappointingly lacking in women’. The firm, based in the centre of London, has 85 partners and more than 220 solicitors.