Law centre could close after council slashes advice grant by 45%

The threat of closure looms over a 40-year-old law centre which has been told that its local authority funding will be cut by nearly 45%.

Sean Canning, the law centre's manager, said HCLC had last-minute talks with the council to reconsider the proposal. 'However, they were not sympathetic, offering only £35,000 over the first two quarters, which is welcome, but will not help what will be a longer-term slide to a deficit budget and possible closure in 2020, according to our budgeting figures'.

HCLC's turnover is around £500,000 a year. The reduced council grant could mean a further reduction in the future levering of non-council funds, the law centre said.

Last year a housing debt advice worker was made redundant after the law centre's debt advice service funding was terminated. With the latest cut, HCLC says it will 'have to consider cutting its immigration department and reducing the team available for housing legal advice'. The law centre recently helped a 62-year-old member of the Windrush generation successfully challenge the Home Office.

In October 2016, the council's corporate policy and partnerships team began working with the law centre, Citizens Advice and Deaf PLUS on a 'systems review' of advice services.

A cabinet paper states that the need for a new approach to delivering services 'is increasingly relevant as public services are evolving in an attempt to respond to complex social problems and the complexity of people's lives'. The law centre said this week that the review failed to take account of the law centre's specialist role to tackle client problems and 'deep-rooted intractable social issues', and the 'holistic context' of its work. 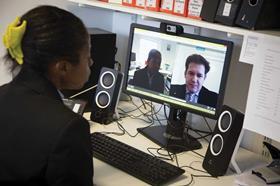 Between April and September 2017 the law centre handled 790 advice line calls, saw 239 people at its drop-in service; 132 clients visited its housing 'pop up shop' at Hackney library. It was the first law centre in the country to take part in a digital pilot to provide members of the public with direct access to a barrister.