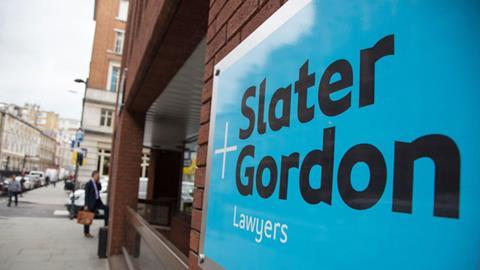 Slater and Gordon writes down value of UK business by £216m

The Australia-listed firm, which was forced to restructure its UK operations last year, posted total revenue of less than £200m in the six months ended 31 December 2016 – down from £300m in the same period of 2015.

The firm still recorded half-year losses of £262m, which was said to equal net losses of £22.5m excluding non-recurring costs. The results were heavily impacted by a £216m ‘impairment charge’ which effectively wrote down value in the UK business.

The results will do little to persuade investors that the business can remain viable, and the firm admitted that its ability to continue as a going concern relies on the continued support of its lenders.

The group has presented revised financial forecasts to lenders and their financial advisers covering the period up to June 2020, together with a number of recapitalisation options. Slater and Gordon’s board said it has ‘reason to believe that a successful outcome will be concluded in the coming months’, although a majority of lenders by value must agree to a satisfactory recapitalisation plan by 26 May.

Lending provided under a syndicated facility agreement made in December means the company has borrowings of more than £450m, more than half of which (around £260m) is repayable in May 2018.

Slater and Gordon reported underperformance across its UK and Australia operations in relation to the resolution of personal injury claims.

SGL UK was said to have ‘continued to underperform’ during the second half of 2016 due to the disruption caused by the transformation activity, staff turnover and the impact of ‘negative sentiment’ on the business.

Slater and Gordon group managing director Andrew Grech said the results reflected a business ‘still very much in the midst of a major transition’.

‘While we have made progress in the UK in the past 12 months, the turnaround is taking longer than we anticipated and billed revenue performance in segments of the business is lower than expected,’ he said. ‘The full impact of the performance improvement initiatives will take time. Slater Gordon Solutions delivered positive earning and operating cashflow.’

Much of the bold ambition and attempts to ensure maximum market reach appear to have gone: while its early years after arriving in the UK were characterised by expansion, the firm has instead ceased operations at 18 out of 48 sites in the past six months and reduced headcount by 20%.