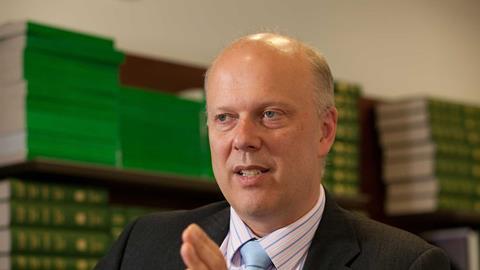 Grayling pledged to end insurers’ ‘practice of making offers to settle claims without requiring medical records’, in the government’s response to its consultation on ­whiplash.

The government also expects insurers to share more fraud data with claimant lawyers and for firms to check potential clients more effectively before taking on claims.

The Ministry of Justice will create an independent panel of whiplash specialists to assess all soft-tissue ­injuries.

But despite ‘good arguments’, Grayling said increasing the small claims track threshold to £5,000 ‘may deter access to justice for the genuinely injured and encourage the growth of those disreputable claims firms which so damage the industry’.

The Association of Personal Injury Lawyers described the decision as a ‘huge relief’ and said Grayling ‘appears to have recognised that genuinely injured people would have their much-needed access to justice ­compromised’.

But James Dalton, head of motor and liability for the Association of British Insurers, said the group will continue to campaign for a £5,000 limit.