A regime for regime change

The Handbook of the Law of Visiting Forces (2nd edition) 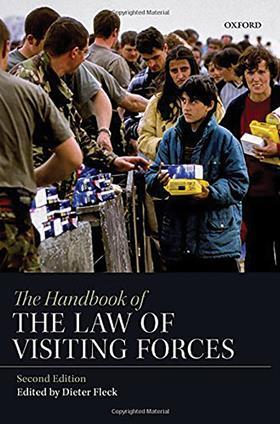 This handbook concerns a discrete area of law and practice but one which cannot be ignored in the modern world. The law governing armed forces in ‘third states’ refers to those jurisdictions which have either invited or been forced to accept the presence of a visiting armed force: for reasons of internal armed conflict, counter-insurgency, peacekeeping, or by way of ‘regime change’.

This is not a handbook about the laws of war and the impact of the Geneva Conventions. Rather, it is a work on the regulation of visiting armed forces when occupying, or peacekeeping, or countering domestic insurgency. Sadly, in our globalised and dangerous world, the legal position of visiting forces transcends both international and domestic law. It demands a sophisticated legal regime which can strike a balance between global peace and domestic social, economic, religious, cultural and political sensitivities.

The first edition was published in 2001, before the second Iraq invasion and the Afghan insurgency and occupation.

This new handbook reflects developments in this area of law and brings together leading experts, reflecting a broad range of specialist knowledge: legal academics, senior policy advisers, judges and military analysts. They survey all the relevant territory, including the NATO SOFA Rules (Status of Their Forces); and headquarter agreements. The handbook has both a compelling section introducing this area of law and practice (including the matter of force immunity), a section of useful case studies to present how the law operates in practice, and a conclusion which considers visiting forces in an operational context.

The book also surveys the development of customary law and how international rules become accepted by custom within host states. At the core of this is the status of NATO.

As Professor Dieter Fleck notes in his preface: ‘Military forces serving in the territories of other states have become a key characteristic of the post-World War II era. Tasked by their sending states and often mandated by an international organisation, they are conducting operations that need to be regulated to ensure compliance with international law, developing cooperation with the receiving state, and achieve mission performance.’

This is an invaluable resource.

Christopher Stanley is a litigation consultant at KRW Law LLP and was legal officer with British Irish Rights Watch NGO, where he worked closely on the Baha Mousa and Al-Sweady inquiries.