We are not the only generation of lawyers to have demanding clients who expect everything but may not pay; a challenging environment to practise law in; and governments which do not invest much money in courts and restrict our fees. This brilliant story is set in Third Century Roman Britain and is about a lawyer whose practice is in Eboracum (York) when it was a major city of the Roman Empire. He is the local go-to expert on contested wills, the next big thing in litigation no doubt. Our hero acquires a mysterious and attractive client with an equally mysterious and possibly lucrative court case. The only thing is he has to travel to the local court which is long journey taking days across bandit country. 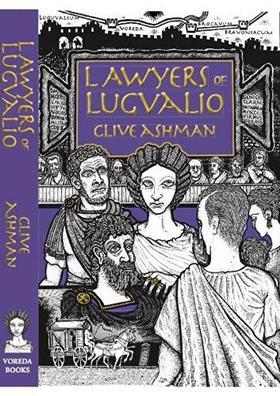 The story is based on real events and people pieced together from archaeological finds. Much of the book is taken up with the journey from York to Carlisle. It would probably take longer now. As a historical novel, it feels very authentic and realistic. There are lots of lawyers’ in-jokes. The lawyers’ entourage includes an outdoor clerk and a security detail. There are legal maxims such as always look after the client and ‘no win, no fee’.

It was during his dozen or so years as a criminal prosecutor that Clive Ashman discovered the true-life crime inspiring his first book, Mosaic, about the 1940s theft of a Roman pavement from Yorkshire. Moving south to head the force solicitor’s office of a Midlands constabulary but still mulling-over that crime, Clive developed its plotlines before his later experience as the chief executive to a northern police authority led to his second book called Two-Eight-Six – about the rebel emperor Carausius who commanded the Roman navy in Britain, combined with more modern themes such as the European arrest warrant.

Roman history has a strong attraction for many people and dominates our culture and thinking two thousand years’ later. This is evidenced by the interest in various television programmes, books and films and includes I Claudius and Rosemary Sutcliff’s Eagle of the Ninth. I was intrigued by a reference at the beginning of this book. The Emperor Claudius did reform the legal system. Up until his reign only the wealthy could afford lawyers, and so cases were often decided by whoever had the most expensive, and therefore, the most knowledgeable legal team. Claudius brought in methods to speed up the legal processes and made legal representation more widely available for the less affluent members of society. Why did not that idea catch on?

This not only a good story and interesting read, but the production standards of the design and illustrations are excellent.