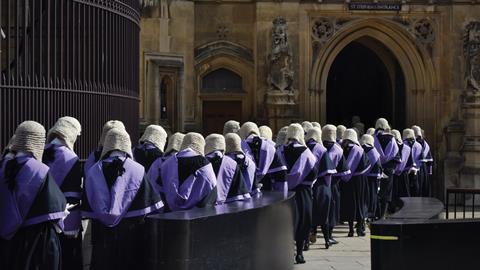 A timely interrogation of the judicial role

Enemies of the People? How Judges Shape Society

The combination of an iconoclastic executive hungry for change and a huge government majority in parliament is bound to pose questions of the third branch of government – the judiciary. Throw into the mix the fashion for delegating law-making powers to ministers and the constitutional turmoil of our withdrawal from the EU, and those questions begin to look all rather difficult.

Enemies of the People is thus a timely interrogation of, and indeed the proper limits of, the judicial role. Rozenberg collects together examples from a range of themes – crime, family, religion, as well as the more fêted constitutional – to interrogate whether judges make law and whether and when it is right that they do. Only the freshest-faced among us could disagree with his premise – which he states with commendable clarity – that it is ‘nonsense’ to say that judges do not make law. The real question, and subject of his book, is when and how they should.

There is a lot to like about Enemies of the People. No one familiar with Rozenberg’s work will be surprised by his crisp and fluent handling of complex material. And the breadth and depth of his knowledge of the field – accrued over decades of reporting for public media on the law – emerges from every page. And it is only by examining the range of contexts – religion, discrimination, the right to privacy of the rich and famous – in which the question arises that one gets a sense of the complexity of the answer. And from it all emerges a rather sharp question for the likes of the dark money-funded Judicial Power Project. Is their real complaint that judges make law – or is it that they object to limitations on executive power?

But the book also has frustrating blind spots.

A previous attempt on this subject – Lord Devlin’s 1979 The Judge – repeated his early characterisation of the judiciary as a ‘body of elderly men who have lived on the whole unadventurous lives… old-fashioned in their ideas’. Devlin was making, in charmingly self-deprecating fashion, an important point about the propensity of judges to social conservatism. But as we look today upon a still overwhelmingly white and male judiciary which, by and large, has always lived in privilege, the observation has rather different resonances.

Once you accept, and you must, that judges make law there is no escaping how much it matters who they are. The law made by judges who played the Wall Game together will be different to that made by judges whose experience of the establishment is not of a beneficent shelter from wrong but of a hostile bouncer keeping out those who do not belong. I do not say this to criticise judges – most of whom in my experience are thoughtful about such things. But if you are asking whether it is legitimate for judges to make law it matters hugely that they are drawn from so thin a slice of modern Britain.

Jolyon Maugham QC is a barrister at Devereux Chambers