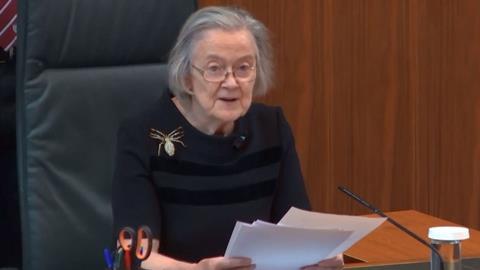 A true pioneer 'equal to everything'

On the rear of this book’s dustjacket are four comments from eminent lawyers. The first two focus on Lady Hale herself (describing her as a ‘superhero’ and ‘Spider woman’) and the other two on the book. This highlights two strands of this biography: the life itself and the telling of its story.

The first strand depends upon the life being of sufficient interest. Clearly the life of someone who reaches the pinnacle of their profession, particularly the first woman to do so, satisfies this criterion with ease.

The success of the second depends, in part, upon the likely audience. This might be harder to specify when Lady Hale is one of the few judges to become well-known outside the profession (the book’s title and an appearance on BBC’s MasterChef also demonstrate this). Consequently, it could appeal more widely than other legal biographies.

Spider Woman begins with the epigraph ‘Omnia feminae aequissimae’ – the motto chosen by Lady Hale on appointment to the House of Lords: ‘Women are equal to everything’.

Thereafter follows a memoir self-styled as the story of how a ‘little girl from a little school in a little village in North Yorkshire became the most senior judge in the UK’.

The once little girl describes herself as a ‘speccy swot’ and her desire for academic success is evident from the early chapters that explore village and family life and identify the strong academic background from which she comes (‘My family’s occupation was teaching’). These chapters also introduce an early interest in feminism, which is an enduring theme of this work.

The connection with law begins in chapter 3. This consists largely of a brief explanation of 17th century constitutional history with a sprinkling of Magna Carta on top. This interest in history and her headteacher’s contrary view that she was not a natural historian, led Brenda Hale to embark upon a law degree.

Given her family’s educational background, university was expected and Cambridge the result. Chapter 4, ‘University Life’, once again features an historic section, this time charting the long delay between women being admitted to female colleges and them being eligible for the cantabrigiensis – Cambridge’s undergraduate degree.

After Cambridge, Lady Hale faced a career choice; whether to go into practice or academia, and for a while did both. Following work experience with county and city solicitors she settled on the bar and combined this with an assistant lectureship at Manchester University. This section provides an eye-opening insight to attitudes towards women in the law in the late 60s and early 70s.

By Chapter 6, Lady Hale defines what feminism means to her and relates it to some of the significant legal issues of the last 50 years, such as how the law viewed domestic violence in the 70s. Here she engages with the law and the scholarship and argues for increased diversity on the bench. She recounts Gill v El Vino Co Ltd [1983] which involved judicial consideration of a ban on women standing at the bar of a Fleet Street wine bar, which may be known to at least some readers of the Gazette.

The second half of the book covers ‘Public Life’. It begins with Lady Hale’s time at the Law Commission, where she was the youngest person and the first woman to be appointed, and the subsequent ‘tap on the shoulder’ that resulted in her appointment to the High Court bench and the automatic damehood that accompanies it.

Subsequent chapters deal with her elevation to the Court of Appeal and the House of Lords, and her move to the Supreme Court. The role of each institution is explained succinctly with examples of the work she was involved in.

And so back to that second strand: audience. The work is a mix of memoir and textbook. It charts the remarkable professional life of the subject without revealing much by way of personal detail, until the tragic postscript. It is not hugely anecdotal, as Lord Brown’s Playing off the Roof was, or revealing (for that, see Lord Hope’s Diaries). There’s a good deal of legal description and those outside the law may find this aspect a little dry.

I would highly recommend the work to law students, the newly qualified and those with a sociolegal interest in the treatment of women within the law and the profession. There is probably not enough here for the reader who comes to Lady Hale only through brooches and her celebrity, but perhaps that is appropriate given the author reached the pinnacle of her profession not through that celebrity, but serious legal ability.