Advocacy and knowing when to put a sock in it

I am now more an advocatee rather than advocate, if you see what I mean. That is, I am usually on the receiving end of advocacy. In my day, advocacy was not part of academic or formal training. You just learned by trial and error. More error than anything else. I have not looked at a book on advocacy for many years. The most important book I did consult was The Technique of Persuasion by Sir David Napley. It went through several editions in the 1970s and 1980s and was one of the few on the subject written by a solicitor. The profession then was encouraged to take more work from the bar.

I wonder if now there are fewer opportunities to learn the skills of an advocate. Fewer firms do legal aid work where many of my generation attempt to learn the tricks of the trade. Advocacy is difficult to teach and many books on the subject are dull. It is like learning to dance from a handbook. The best way to learn is to get up on your feet and have a go. There must be plenty of people who never get beyond a few tentative steps. Books on advocacy are full of mistakes to avoid – and there is a certain schadenfreude in even members of the bar making dreadful howlers.

There is much that can be learned from the great advocates of the past. These include Edward Carson before the second world war; Lord Birkett in the 1950s; Carson or George Carman in the 1990s. They all made it look so easy. There was a golden age of advocacy which has probably now passed.

This book is really first rate and can be read with pleasure and benefit any advocate at any stage of their career. We are all advocates, whether we appear in higher courts, tribunals. Everything we say or write is a type of advocacy as we are trying to persuade someone to do something. The greatest test of advocacy is persuading your client to accept advice. 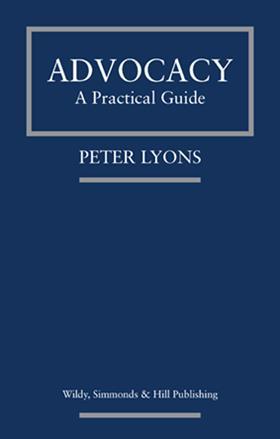 This book is written by an Australian lawyer who introduces interesting points and cases from jurisdictions other than England and Wales. The book includes sections on different aspects of court work, including written advocacy, ethics and presentation. He uses a case study with pleadings and evidence. Based on real litigation, it makes for a practical and interesting book.

The main points to advocacy are be prepared, know what the case is about and what the tribunal can do. Know your client. So many advocates seem to be wary of their client and berate them with the same vehemence as the other side. The writer encourages us to practise in the sense of rehearsing what to say. How many people do that? We should do, I suppose. Knowing when to stop talking is just as important as knowing what to say. If you get a favourable answer, stop digging. The witness may change their mind.

Advocates must learn to read the court. Most judges are busy and want advocates to be quick, nice and simple. The writer likes ‘chunking’ which means speaking in bite-sized chunks, and allowing for the point to drop. Advocates rarely read the tribunal properly. Sometimes a judge will ask a witness to ‘follow my pen’. Meaning stop when he or she is writing. Advocates should watch the pen as well. If the judge is stabbing him or herself in the head with the pen then the advocate is failing in their job. Cross-examination is the trickiest part of advocacy but cross-examination is not the art of asking questions crossly as some seem to think.

In 2005 a Crown court Judge asked an unfortunate barrister how long he had been a barrister. Counsel replied, ‘long enough’, to which the judge replied ‘but everything you say is utter rubbish’. I hope that advocate learned something as we all have much to learn.