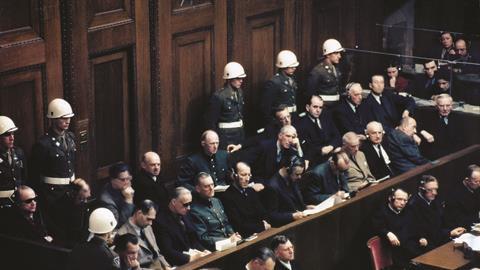 Holocaust, Genocide, and the Law: A Quest for Justice in a Post-Holocaust World

In one regard, the rule of law was highly respected in Nazi Germany. All the actions taken against Jewish people had to be legally authorised. This book analyses every legal aspect of the Holocaust and what we now regard as genocide.

Although the Holocaust occurred seven decades ago, the legal ramifications continue to be felt. The Red Cross did not hand over documents relating to the Holocaust until 2006. Litigation against the national rail company of France was settled as recently as 2014. Restitution of assets and compensation claims continues.

Efforts to prosecute war criminals rather just than execute them have had mixed results. The Nuremberg trials (pictured) in the 1940s were seen as the high point in using courts to prosecute crimes against civilisation. However, the process ended abruptly as soon as the Cold War started. Germany was then seen as a partner against communism. As many as 80% of German judges and prosecutors during the Nazi era returned to their profession after the war. It was then left to individual countries such as Israel to find and prosecute Nazis.

This comprehensive book covers the history of crimes against Jewish people, the aftermath of the war, civil litigation claims, the crime of Holocaust denial, individual states’ criminal actions against Nazis and modern international justice.

Genocide has continued into this century and states still make against people simply because of their race. Never again, said the world in 1945 – and so must every generation echo that.