The Ten Types of Human: a new understanding of who we are and who we can be

Human rights barrister Dexter Dias QC swaps the courtroom for an odyssey encompassing sub-Saharan Africa and Haiti in this hefty exploration of the essence of human nature, invoking the right-to-die case of Tony Nicklinson, female genital mutilation, acid attacks and child labour. This epic 800-pager rests on the theme of how the 10 types of human ‘affect people in their everyday lives’.

In the section titled The Tamer of Terror, Dias recounts how Nicklinson, whose locked-in syndrome meant ‘only one small – minuscule – islet of control remained: blinking’, needed someone to kill him as ‘suicide was not an option for him’. But former lord chancellor Charles Falconer’s independent commission on assisted dying opposed such right-to-die claims; in 2012, the High Court rejected Nicklinson’s claim. Another example of locked-in syndrome concerns Dawn Faizey Webster, whose ‘mind function[s] acutely’ yet ‘her body [is] totally paralysed’. Yet Dias explains how ‘the easy affability of our email correspondence’ (Dawn can only move her left eye and her head slightly) perhaps attests to how she tames her terror. As elsewhere in Dias’ exuberantly written account, he deftly blends neuroscience, social psychology and law, citing the French term for locked-in syndrome, maladie de l’emmuré vivant, or ‘being walled in alive’.

The case of Kay Gilderdale epitomises the dilemma of whether or not to assist someone you love to kill themselves, for her daughter Lynn had the neurological disease ME, entailing 50 hospital visits over 16 years. When Lynn injected herself with morphine, her mother goes along with her daughter’s request to fetch more morphine, though ‘Lynn pushed the plunger in’. Charged with the attempted murder of her daughter, Kay was ultimately cleared by a jury at Lewes Crown Court. Mr Justice David Bean said ‘the [jury’s] decision shows common sense, decency and humanity’.

As a Perceiver of Pain, Dias suggests that the unimaginable plight of, for example, the 168 million child labourers globally, could be an impediment to compassion, leading to ‘psychic numbing’ and ‘cognitive paralysis’. Dias describes the life of Anthony, sold by his father to fish as a child labourer on Lake Volta in Ghana, who ‘knew that life at the lake would kill him’. Anthony escaped to Ghana’s capital Accra. When Dias, who visited a human rights project supporting children at the lake, meets him and suggests an NGO could help him, Anthony ‘didn’t want other people’s assistance’. As Dias movingly writes, ‘Anthony had overcome the world. By himself’.

In The Ostraciser, we meet Kathy Bolkovac, who joined the UN’s International Police Task Force in Bosnia. Bolkovac helped police investigate human rights abuses and led a UN project combating violence against women. But after discovering women ‘trapped in a form of debt bondage’, Bolkovac was dismissed – ‘the death threats began’. In winning her unlawful dismissal case, the court found she had been sacked ‘because of her efforts to raise awareness of human trafficking cases and exposing corruption’.

In The Beholder, Dias draws on the experience of Hanifa Nakiryowa, who suffered an acid attack in Uganda which subsequently entailed 20 operations and using cartilage from her ribs ‘to help rebuild her nose’. She has relocated to the US. Survivors of such attacks, especially in countries such as India, Bangladesh and Cambodia, face ‘marginalisation and stigmatisation’, according to Cornell University’s International Human Rights Clinic. Dias opines: ‘The Beholder in us, the wiring for beauty and fine form, struggles.’ 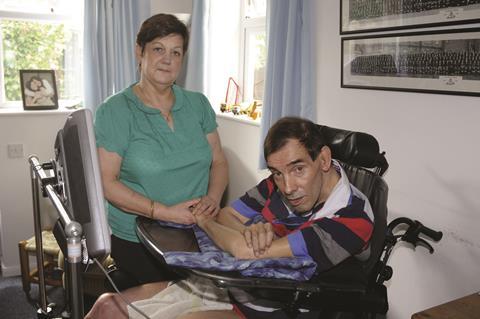 Tony Nicklinson and his wife Jane

In Haiti, Dias builds his case for The Tribalist, recounting the killings in 1937 of Haitain workers who had settled across the border in the Dominican Republic. These killings were ordered by Dominican dictator Rafael Leónidas Trujillo. About 12-15,000 people died. And after the 2010 earthquake in Haiti, when ‘everything was demolished, broken, destroyed’, gangs of thieves took control. Some 4,000 prisoners escaped from Port-au-Prince prison. In the camps that sprung up, ‘women’s groups organised themselves’, training themselves in martial arts to protect themselves from attacks.

On FGM – ‘somewhere around the world, another girl is mutilated every 11 seconds’ – Dias turns to Ubah, who has been ‘ostracised and cast out and threatened’ for speaking out about being genitally mutilated at six-years old. Dias suggests a way to ‘reduce the levels of social suffering’ could be to enlist those ‘who believe in or have been brought up to subscribe to the practice’. In wrapping up his magisterial account, Dias, who co-wrote the Bar Human Rights report into FGM, calls on readers to get involved in the charity ActionAid, which has been supporting women’s rights organisations in 10 different countries.

Dias summons a formidable array of sources, including Darwin, Galileo, John Locke and the late Stephen Jay Gould. The bibliography is divided into the book’s 10 parts and then subdivided into topics.

Underpinning all this is Dias’ raison d’être for writing the book: the death of Gareth Myatt at Rainsbrook Secure Training Centre. Dias represented his mother at Gareth’s inquest, where the jury ‘returned a devastatingly critical verdict’ on the care and treatment of detained young people.

Dias writes in his epilogue that ‘these twin processes – the dispiriting and the dignifying – seem to go hand in hand. How to make sense of it?’ His book, which brims with dazzling writing and a fiction writer’s flair for dialogue and pacing, goes some way to solving this mystery.