What’s To Become of the Legal Profession?

US lawyer and business economist Michael Trotter’s last book, Declining Prospects, provided a compelling analysis of the inherent sources of instability he observed in elite law firms. Of particular interest was the collapse of Dewey & LeBoeuf, an example of a firm paying (through huge salaries and drawings) to play at a table where there was insufficient work to go round.

By contrast, his latest is a relatively sunny read. ‘Many academics and consultants have been predicting for years fundamental changes in the way legal services are provided to clients; changes that would significantly and adversely affect the need for lawyers as well as the conditions and income expectations of those lawyers who survived,’ Trotter notes. He adds, dryly: ‘I do not agree with these disturbing predictions.’

Richard Susskind’s argument that ‘the legal profession in the future will bear little resemblance to the way in which lawyers have worked in the past’ is now close to orthodox thinking. It is refreshing, then, for Susskind to be challenged, not least by an author whose analysis involves a look back (50-70 years) as well as forward. 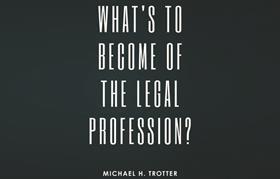 Trotter has an easy facility with the technological changes that intensified from the early 1990s onwards – from communication to automation. He concludes: ‘Most of the new technology available to practising lawyers has assisted and improved the practice of law rather than interrupting or disturbing such efforts… Each new generation of lawyers takes for granted what they find in place.’

Conversely, the highly leveraged law firm model that emerged from the 1970s has been a greater source of instability in the profession. Promised rewards for those who reach the top have delivered ‘market saturation’ in the high-end corporate law world.

Law firm leaders have focused on leverage and technology at the expense of other forces shaping the profession, including economic and political change, the growing complexity of regulation and laws, and increasing competition.

Understand that, and one can see why Susskind’s prediction that ‘law’ would become (or be displaced by) a ‘one-to-many’ packaged information service gets short shrift here. Technology, Trotter believes, ‘breathes new life’ into small firms – instead of replacing them.

Trotter does see change in the profession, but places it in context. A fall in compensation levels in some commercial areas is a historical correction, not a disaster. Use of technology will create new jobs, as the need to manage new processes will increase the need for facilitative roles.

It is lawyers themselves, though, who will be the greatest source of disruption. Trotter concludes: ‘Our surplus of self-confidence will only complicate and intensify the competition among lawyers and law firms for the legal business still available to them. Most of us think we are smart enough and can work hard enough to outperform the competition.’

Eduardo Reyes is commissioning and features editor of the Gazette