Environmental law is any law that prevents harm to the environment. As long as people have wanted clean water and made a mess there have been rules about this. 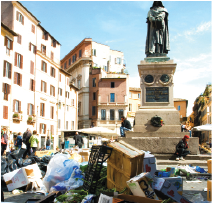 The Romans passed a law to protect innocent bystanders from assault from (toilet) waste thrown into the street. The miscreant had to pay compensation to anyone injured, but only in daytime. Anyone out at night had to fend for themselves. Perhaps the Romans had no win, no fee claims management firms that pestered the public and asked if they had had poo throw over them recently – and did they know they can claim?

There were court cases in the 17th century about the nuisance from pigsties.

Industrialisation has developed more ways of polluting the world more efficiently – and the law has tried to keep up and clean up. Public health legislation developed in the 19th century led to the Clean Air Act.

More recently, there has been concern about irreversible changes to the world and what happens when resources are exhausted. What is the role of law in bringing large organisations and authorities to account – and does this extend to international law?

This is an interesting and important subject from a series of books which are usually excellent. Unfortunately, it is not an easy read. The writing is not always clear and the different theses the book offers are not always convincing.

David Pickup is a partner at Aylesbury-based Pickup and Scott