Courtroom drama and life on the wrong side of the law

I must confess to a fondness for legal terms of art made book titles. If memory serves, although perhaps I dreamt this one summer night, a series some years ago used the transactional world as a naming convention, giving us ‘Due Diligence’, ‘Data Room’ and so on.

William McIntyre takes a similar tack, Bad Debt being one of a series of novels which includes Last Will and Present Tense. Putting the old adage ‘write about what you know’ to good use, McIntyre brings his considerable behind-the-scenes knowledge of Scottish criminal defence work to bear in skilfully combining courtroom drama with crime procedural.

Husband and wife Robbie and Joanna Munro (although – an important plot point – she practises under a different name), are positioned either side of the prosecution / defence divide. As they meet in court for what seems (of course) to be a cut-and-dried case, a threatening presence emerges from the shadows. Matters rapidly escalate in a fast-paced narrative of deception where everyone is on the wrong side of the law. 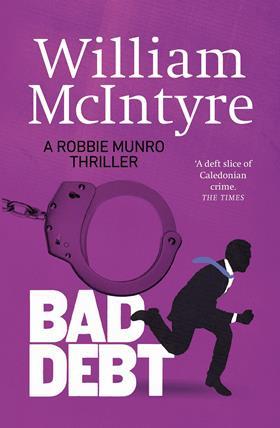 Robbie is cast in the well-known mould of the dour detective, granted he has moved horizontally to defence lawyer. He has been through it all, knows everyone and, while not  completely disillusioned with courtroom life, thinks he sees its ignoble core. In a break from the norm, he is not (i) divorced or (ii) a heavy drinker, which plays against trope despite the pub still having a regular and predictable role throughout proceedings.

Robbie’s nonchalant attitude to violence (admittedly, given his profession, he will have seen things in his time) and to the unravelling of his career, lends a Midsomer air to the novel. Joanna is sharp as a tack, but given very little room to develop. Verging on but narrowly avoiding ‘cosy crime’, a realistic sense that things might not work out would make this the page-turner it is intended to be. That, and some judicious cuts to descriptions of courtroom procedure (though an understandable inclusion given McIntyre’s background).

It remains a well-written thriller with an unusual plot while maintaining the twists expected of the genre. The author’s real-world inspiration for the novel, described in an end note, gives an added frisson.

An enjoyable read, then, and one well worth taking to the beach or, in today’s world, wherever you staycation. I’m sure Robbie Munro will return and I look forward to reading his next adventure.