Helping us keep up

The first edition of the Handbook was remarkable in that the foreword came from the president of the Upper Tribunal, Bernard McCloskey, and included the endorsement: ‘This is… a compulsory addition to the library of every immigration judge and practitioner.’ This new edition carries a foreword from Sir Peter Lane, the current president of the Upper Tribunal ending with the words, ‘[this] is an invaluable work for all who practise in the field of immigration law’. Perhaps no more needs to be said, but I shall resist that temptation.

What makes this book invaluable and essential is its logical progression, a style of writing that makes it an easy read, and its comprehensive nature. From decision making, through rights of appeal, preparation and hearings, to onward appeals and post-decision representations, the reader is guided through each step of the process.

Amid the pandemic, practitioners should find the sections on the ‘special arrangements’ and the chapter on remote hearings particularly useful. The authors note ‘a remote hearing may well be sub-optimal but can still be an effective remedy’ and later that ‘the suitability of a remote hearing is a question of fairness’. 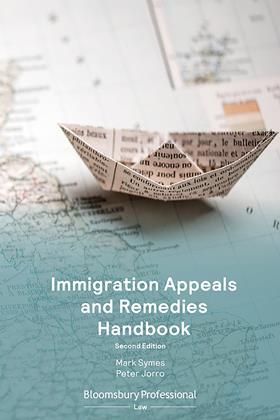 With the competing financial advantages of remote hearings for all parties, it must be hoped that these mantra remain to the fore as and when we come out of the pandemic.

Between the first and current editions of the Handbook, judicial reform has commenced in the IAC and with it the ‘myHMCTS’ online process. The Handbook is alert to the changes, dealing as it does with ‘Appeal Skeleton Arguments’ and the respondent’s ‘meaningful review’. Perhaps optimistically, the authors note that the ‘more intensive case management regime occasioned by the reform online procedure can be expected to make early formal engagement from the secretary of state with the appellant’s case more common’.

A handbook written by practitioners for practitioners can be expected to comprehensively deal with case and hearing preparation, and the authors do not disappoint in this. Extensive attention is paid to preparation of witness statements, evidence in general case management review hearings, adjournment applications, directions, the interrelation with family proceedings and so on. Equal detail is devoted to the hearing itself with the practical eye that only those who have been involved in hearings can give. There is suitably generous attention paid to vulnerable witnesses, capacity, children and the use of medical evidence. This is not a book written by academics – practicality shines through at every juncture.

For many, the Handbook will come into its own post-First-tier decisions, and about half of the content is devoted to what happens next. Practitioners will find the procedure and considerations on dealing with applications for review and permission to appeal particularly useful. The different character of Upper Tribunal appeals is clearly shown and the authors’ experience is apparent. Again, reference is made and guidance given on the different approach required during the pandemic.

Throughout the Handbook the authors make full reference not only to the law but to the various practice directions and presidential practice statements bringing together a comprehensive guide for those dealing with immigration appeals at every level. This text is essential reading for those new to the jurisdiction and experienced practitioners alike, and it should be an essential addition to the bookshelf of all immigration lawyers.

It would be remiss of me if, as an immigration lawyer, I did not mention how complex and cumbersome immigration law is. Not only that, but the pace and depth of change can be overwhelming. It seems like yesterday when we saw the massive changes to the rights of appeal (in 2014), shortly before the first edition of this book was released. And here we are again, amid yet more changes brought about by the aftermath of the UK’s departure from the EU and the Covid-19 pandemic, necessitating a second edition.

The Handbook deals with all of the classic issues arising in immigration appeals in easy to identify and accessible chapters, and always with an eye to practice. For example, authors provide practical guides on the type of day-to-day issues that arise in immigration cases, such as the interaction between the Family Court and the immigration tribunals, seeking directions, calling witnesses and making submissions before the tribunals.

In reviewing the Handbook, I paid particular attention to one of the most recent developments in this area: the issue of online appeals thrust upon us during the early days of the pandemic.

Having dealt with the procedure rules in earlier chapters, with easy-to-follow procedural guides on when and how to comply with directions, the Handbook also dedicates a chapter to the issue of remote hearings more generally. In just 10 short pages, the chapter succinctly explains the case law, provides an up-to-date summary of the research on remote hearings, and practical advice on identifying potential problems in remote hearings and tips to mitigate them, leaving the reader well-armed and well‑informed.

Coming from two highly experienced and well-regarded barristers at Garden Court Chambers, Mark Symes and Peter Jorro, the former being a judge in the Upper Tribunal, it no surprise that the Handbook is reassuringly comprehensive and practical regarding the rights, scope and practical experience of appeals in the First-tier and Upper Tribunals, the Special Immigration Appeals Commission, and in the higher courts, as well as on administrative and judicial reviews.