The Renaissance of Roman Colonization: Carlo Sigonio and the Making of Legal Colonial Discourse 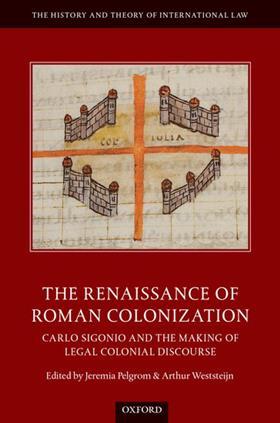 This is a highly specialised work on a relatively obscure Italian 16th century academic called Carlo Sigonio who taught in Modena and Venice. He studied classical subjects, including Roman law and how this was applied to their colonies. His book on the subject was influential to academic jurists in the following centuries, and was applied to issues about modern colonies.

Colonies have been founded for a variety of reasons – from rights of conquest to trading rights. Ancient Rome set up many settlements in Italy, then throughout the Mediterranean and ultimately in Britain. Rome’s policy was to transform conquered territories into the settled colonies rather than occupied states. Veteran soldiers were rewarded with grants of land to encourage them to settle and have an interest in the development of the colony. Farmer settlers with land rights were considered preferable to serving soldiers guarding conquered peoples. How successful they were is arguable. Rome also considered colonies as useful place to house their surplus population, including those considered idle or criminal.

In the centuries that followed the period when Sigonio was active, legal issues arose about how modern colonies should be legally governed. Should colonies govern themselves or be subject to royal nominees? How was the colony to be funded and if they were taxed, were they represented in the imperial parliament? These issues came to a climax in North America; it was Sigonio’s teaching to which legal theorists often turned. Some colonies were seen as potential utopias and law as a means to achieve this. This is an interesting subject, although views about the legitimacy of the subject are controversial.