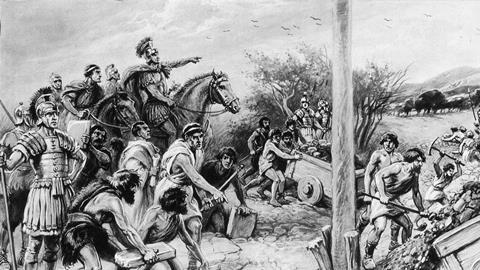 The Roman Occupation of Britain and its Legacy

First, a confession. It has been a very long time since I have read a book on the Romans – or indeed any kind of history book, unless I am allowed to count Wolf Hall (I am guessing not). But as someone who has read an awful lot of judgments by Sir Rupert Jackson, it was clear before getting to page one that this would be no wordy academic tome. It would be straight to the point with zero tolerance for waffle – and indeed it is.

Jackson does not include one of his trademark ‘skeleton arguments’ in this book, but in his preface he pithily explains what it is all about: the history of Britain between the late Iron Age and the ‘first Brexit’ in AD 409. One interesting theme is that Rome’s annexation of Britain was less about profit and more about kudos. We were a ‘trophy province’ that did not pay our way for at least the first two centuries.

The stories Jackson tells are fascinating, not just because the various invasions and rebellions are interesting in themselves, but because he always explores why people did what they did. Take Emperor Claudius in AD 43, for example. He was deeply unpopular and physically weak; with a feeble body, described by his own mother as ‘a monster of a man, whom nature had not finished’. In a world where physical prowess was prized in a leader, he needed a bold move to establish his virility. Invading Britain – which had previously only ever been invaded by the great man himself, Julius Caesar – was the obvious choice.

Ever the lawyer, Jackson also loves to cut through the ‘spin’ that Roman sources with their own motives could have placed on the events they recounted. In AD 40, for example, Caligua did indeed amass an army on the northern shores of Gaul with the intention of invading Britain. But did he really then order his soldiers to fill their helmets with sea shells, declaring these ‘spoils of the ocean’, before marching them home? Or, more likely, did the emperor simply make a rational decision as he stood on the brink of conflict, concluding that invading Britain was not worth the effort. Perhaps he wasn’t so mad after all.

This book is a great read and recommended for anyone who enjoys enthralling, well-written stories – even if they do not consider themselves history buffs.

All post-tax profits to charity.