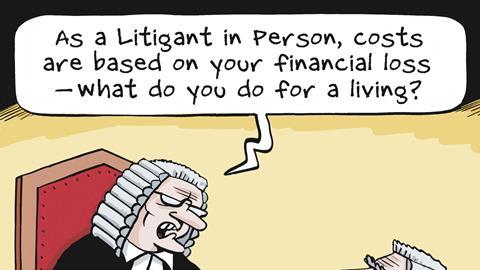 Costs and litigants in person

Ian Besford outlines the rules and case law on costs for a growing proportion of litigants.

With the almost complete withdrawal of legal aid and the ever greater cost of legal services, it is inevitable that both the courts and the profession will be confronted with significant numbers of litigants in person (LiPs). With ever more LiPs, the likelihood of an order for costs in favour of an LiP increases. The assessment of such costs, however, presents its own challenge in much the same way as a solicitor’s claim for costs challenges LiPs.

The costs of an LiP are as a result of statute. No right existed under common law. The Litigants in Person (Costs and Expenses) Act 1975 (as amended) (the act) gives the LiP the right to recover ‘… sums in respect of any work done, and any expenses and losses incurred, by the litigant in or in connection with the proceedings to which the order relates’. The act does not apply in all instances, but it does apply to most cost-bearing tribunals, including all civil and family courts, the Lands Tribunal and both the first-tier and the upper tribunals. Where it does not apply, only out-of-pocket disbursements are recoverable (section 1(1) of the act).

While neither the act nor the Civil Procedure Rules (CPR) define what an LiP is, CPR 46.5(6) clarifies that an LiP can include a company or other corporation, a barrister, a solicitor, a solicitor’s employee, a manager of a body recognised under section 9 of the Administration of Justice Act 1985 (incorporated practices) and a person who, for the purposes of the Legal Services Act 2007, is authorised to conduct litigation. In brief, a person who acts on his own behalf for either all or part of the claim is likely to be an LiP, unless represented. However, the fact that representation may be for only part of the proceedings does not preclude a successful LiP from recovering costs for the aspect of work he conducted while not represented (Agassi v Robinson (HM Inspector of Taxes) [2005] EWCA Civ 1507, [2006] 1 All ER 900 at para 25).

A LiP seeking to claim costs may present a claim calculated in one of two ways:

The hourly charge is currently £18 per hour, increased from £9.25 per hour on 1 October 2011. In respect of either category, the maximum the LiP can recover for time is two-thirds of the amount that would have been allowed if legally represented. This limit does not apply to disbursements.

In respect of financial loss, it is for the LiP to establish by evidence and on the balance of probability that a financial loss has been suffered. Furthermore, the LiP must go on to show what that loss actually is. As Mr Justice Robert Walker commented in Mainwaring v Goldtech Investments Ltd [1997] 1 All ER 467, ‘… a self-employed tradesman in a small but profitable way of business who has more customers than he can cope with and can fill every working hour to advantage; at the other extreme, a retired civil servant with an index-linked pension who finds the conduct of litigation a more interesting pastime than bowls or crossword puzzles.’

Between these two extremes, the court’s job becomes far more difficult.If the LiP can show that the work was undertaken during hours when he was available to earn, is that sufficient or must the LiP go further? In Joseph v Boyd & Hutchinson [2003] EWHC 413, Mr Justice Patten considered that the court should adopt a ‘broad brush’ approach and not enquire to any great extent whether the LiP would have been engaged on other business. If he was available during working hours, one can assume he was available to work. However, even if one adopts such an approach, the LiP must nevertheless go on to show that he would have been gainfully employed and, more importantly, how much he would have earned.  It is the amount lost that gives rise to the claim for financial loss. In practice, it is often on this last limb that LiPs fail.

Where a loss is shown, the LiP may recover that loss, even if the loss is less than the flat rate of £18 per hour. The LiP would be wise to look at the mathematics to ensure the actual hourly loss is greater than £18 per hour prior to making the election.

If the LiP has not suffered a financial loss, or is unable to show a financial loss, then the flat rate applies. While some commentators describe such a rate as low, when compared with legal aid rates, a ‘profit’ of £18 per hour is not unattractive.

Whether the LiP shows a financial loss, claims at the flat rate, or a mixture of the two, the figure allowed in total (excluding disbursements) cannot exceed two-thirds of the amount that would have been allowed if legally represented.

If the LiP seeks costs, either of an interlocutory application, or trial, the LiP should file and serve written evidence to show actual loss at least 24 hours prior to any hearing. It is assumed that this requirement will apply where the costs are likely to be summarily assessed. If the costs are to be assessed by way of detailed assessment, written evidence should be filed with the notice of commencement.

What can be recovered?

A successful LiP who obtains an order for costs may recover

In respect of rule 46.5(3)(c) ‘expert assistance’ is defined in PD 46 para 3.1 as assistance from a barrister, solicitor, fellow of the Chartered Institute of Legal Executives, fellow of the Association of Costs Lawyers, or a law costs draftsman who is a member of the Academy of Experts or the Expert Witness Institute.

For ‘work done’, it has to be work that a legal representative would have undertaken, or a disbursement that would have been paid on the

LiP’s behalf. Presumably, as in Law Society v Persaud (1990) Times, 10 May, QBD, the LiP, who lived in South Africa, would no longer be able to recover the costs of travel to London, as the notional solicitor would have been in London. The fact that the cost would have been recoverable had the LiP been treated as a witness is irrelevant.

The LiP must elect whether the claim is as a witness or as a notional solicitor. The LiP is not entitled to recover both (rule 46.5(5)). In Agassi the costs of employing a tax expert to undertake litigation work were not recoverable as a disbursement since a legal representative would not have employed a third party to undertake such work.

The same could also be said of the costs of routine postage, telephone calls, stationery and copying. Such costs are treated as part of office overheads and not normally recoverable by a legal representative. However, in Mealing-McLeod v The Common Professional Examination Board [2000] EWHC 185 (QB), Mr Justice Buckley commented at (13): ‘A solicitor’s charging rate includes or takes account of the fact that he has support staff, secretaries, messengers, and so forth. A Litigant in Person, for example, must himself post letters, take files to court and photocopy documents. “The time spent reasonably doing the work…” mentioned in CPR 48.6(4) permits a reasonable assessment of time spent by the Litigant in Person and should reflect those matters.’

So while the direct cost of postage, calls and copying may not be recoverable, can the time spent undertaking such tasks be recoverable? Mealing-McLeod refers to CPR 48.6(4) and ‘… time reasonably spent…’. However this definition no longer appears in either the rule or practice direction. It may now be questionable whether such costs can be recovered. However, it could equally be argued that these expenses are reflected as part of the legal representative’s hourly rate, and are not reflected in LiP rates. The LiP should therefore be able to recover such cost. This may be an argument for the future.

Can the LiP recover ‘additional’ time for research? This was considered briefly by Lord Justice Rimer in Grand v Gill [2011] EWCA Civ 902, at (14). In principle he agreed with Lord Justice Schiemann (R v Legal Services Commission, Ex p Wulfsohn [2002] EWCA Civ 250) that a reasonable sum for time expended in research in principle is recoverable. However in Grand the £15,000 claim was allowed at £707.77 to reflect the two short issues upon which the claim succeeded. It would appear that on a robust summary assessment, the LiP is not immune from the effect of costs being reasonable/necessary/proportionate and, presumably post-April 2013, above all subject to being proportionate.

It is not permissible for the LiP to recover ‘notional’ disbursements, such as counsel’s fees where counsel was not instructed (Hart v Aga Khan Foundation (UK) [1984] 2 All ER 439). On a fast-track trial where the LiP can establish a financial loss, they are entitled to recover two-thirds of the amount that would have been allowed for the trial advocate. It would appear that such amount is irrespective of the actual financial loss. Furthermore, while the trial costs are fixed, if an advocate would have been entitled to additional costs under ruld 45.39, so is the LiP.

If no loss can be shown, then the figure is an amount in respect of time reasonably spent. See rule 45.39(5).

So, in conclusion, when making an award in favour of an LiP, the court needs to: