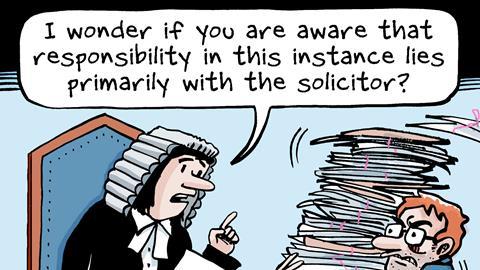 Solicitors have a duty under the Family Procedure Rules 2010 to assist the court in reducing errors.

The decision of Mr Justice Jackson in R v R [2014] EWFC 48 is required reading for all solicitors dealing with applications for ex parte Family Law Act orders, as well as all district judges, full-timers and their deputies. Jackson J identified 11 ‘steps in the process’ which he found to be ‘wrong’: the case was clearly a judicial disaster, but the judge made it plain that the wife’s solicitors also bore some blame for the litany of injustices to which the husband was subjected.

What, then, are the duties, the professional and ethical obligations, of solicitors acting for ex parte applicants? I suggest the following, some of which are highlighted in the judgment under consideration.

1) The solicitors, having taken instructions from their client, must responsibly consider whether an application without notice is justifiable.

Factors in issue will include the seriousness, frequency and currency of the alleged misconduct; the impact of that misconduct on the applicant and any children of the relationship; whether any jointly occupied property can be ‘divided up’ to allow both to remain; the circumstances of the alleged perpetrator; and, crucially, whether an urgent hearing on notice is preferable.

As the object of any court order is to promote the interests of justice, solicitors, as officers of the court, must have some regard for the impact of their activity on the other party, while doing the best for their client. In R v R, the appeal judge concluded not only that no order should have been made ex parte, but also that the application itself should not have been brought on that basis. In the absence of any screening operation conducted by local judges, it is for solicitors to consider these factors and exercise independent judgement.

They will not be subject to criticism where the decision to issue is borderline, but where it is plainly wrong, there will be the wasted expense of attending at court (perhaps including counsel’s fees) as well as possible adverse costs orders.

2) Solicitors, or their instructed advocate, have an obligation to ensure that the court order made is one which the judge has power and jurisdiction to make. This includes considering the proportionality of the proposed order.

Everyone knows that for a court to make an order against a party who has not been served with notice of the application is draconian. Most solicitors will also be aware that district judges and their deputies frequently use, and some may rely upon, tick-box forms which set out a menu of possible orders. The starting point must be that any order requested or made ex parte should contain the least restrictive provisions necessary to keep the peace, pending the return date.

Further, the orders made must be justified by the evidence in the applicant’s witness statement. For example, it is wholly wrong for a non-molestation order to be made in respect of children when there is no or only cursory evidence to suggest that they are at risk.

Slavish adherence to a check list, or – as in this case – misguided acceptance by the judge of an applicant’s wide- ranging draft order, even for ‘only a few days’ (paragraph 14), cannot be a proper exercise of judicial discretion, but it is clear that the draft order submitted by the applicant’s solicitors went far beyond the minimum level of protection needed, and to that extent was inappropriate and misleading.

Although the transcript of the brief hearing before the deputy district judge recorded that she ‘specifically made clear that she was not willing to make (an ouster order)’, the draft order nevertheless excluded Mr R from the street where he lived. So, exclusion from the family home was the effect of the order and, as Jackson J commented, it was ‘unsatisfactory that (the solicitors) did not point this anomaly out to the court’.

It should be noted that while the DDJ made it clear she would not make an occupation order, it is nevertheless possible for an ouster order to be made in the context of an ex parte non-molestation application (as opposed to one for an occupation order), but only where so draconian an order is justified: the circumstances would have to be of the most serious and urgent, far removed from the relative triviality of the facts in R v R.

3) Where there are children affected, and Mr and Mrs R had six, the applicant’s solicitors should consider with their client, both before and at the hearing, how any order made will affect them. It is plain that orders should not be made which inhibit or prevent contact without good reason. It is, of course, possible for an appropriate application for a section 8 order to be issued and heard with the Family Law Act application.

It should also be borne in mind that, as the latter are classified as ‘family proceedings’, any judge seized of the case has power under section 10 of the Children Act 1989 to make orders of their own initiative, whether at the ex parte hearing or on the return date, as and if necessary to safeguard the interests of the children. Incidentally, this is the case even if the judge does not have a ‘ticket’ for children cases.

It would seem from the appeal report and the county court transcripts that no thought was given to the adverse consequences for the children of the scope of the order made at any time. As a result, the children were deprived of contact with their father for some months for no apparent good reason.

4) The order, disproportionately and wrongly in the view of the appeal judge, barred the husband from any direct communication with his wife. Three days after being thus ‘accidentally’ ousted, the husband telephoned the wife, asking if she was proceeding with the case and whether he could come back home. She dutifully reported this single, non-threatening call to her solicitors, and later told the police that she had been told by her solicitor that she ‘had to’ report it to them also.

Inexplicably, the police (and the Crown Prosecution Service) decided to proceed with a prosecution. Whether this was because of the phone call, or because the husband had, with the wife’s consent, not left their home until the morning after service and had subsequently contacted their 18-year-old son is unclear. Only the innocuous phone call would have amounted to a breach of the court order. However, the husband was arrested, held overnight and bailed to appear before magistrates, where he attended in person and pleaded guilty, no doubt just to get the nightmare over with.

The wife made it clear to the police, and no doubt to her solicitors, that she did not want her husband ‘spoken to’ or arrested. She told the police that she was not endangered by him and that she and the children were safe and well (paragraph 22).

Whatever the lack of common sense on the part of the police and/or CPS, one has to ask why the solicitor thought it right to advise the client, as she recollected the advice she received, that she ‘had to’ report the breach of the order to the police. As a direct result of this erroneous advice, the husband was criminalised, entirely contrary to the wife’s wishes. How was this likely to help the parents come to terms with their separation and sort out arrangements for the children? Was any report to the police of so petty a breach proportionate? Solicitors must consider the possible consequences of their advice: to leave the blame with either the police or the judge is casuistry.

This was not a case involving threats, harassment or molestation by telephone or text. In such cases, even a single call made after service of a properly thought-through order may justify prosecution or a notice to show cause.

Finally, there would appear to be a significant procedural error not noted by the appeal judge. As the proceedings wandered ever further down a procedural cul-de-sac the district judge made, clearly of her own initiative, an order in response to a letter sent by Mr R to the court.

As recorded in the judgment (paragraph 33), the order did not include the mandatory statement of Mr R’s right to apply within seven days of service to set it aside. By reason of such omission, the order could be said to be a nullity and it had important procedural consequences, not least in further delay and expense. Solicitors, as much as judges, are paid to know these things and when, as is likely the case here, the court office sends out an order which does not comply with the rules, it is for competent solicitors to take the point and get the order amended.

The lesson for solicitors is that it is not enough to rely on the judges to get it right, and your duty, both professional and pursuant to the overriding obligation in the Family Procedure Rules 2010, is to be proactive in assisting the court to reduce errors to a minimum so that cases may be dealt with justly.