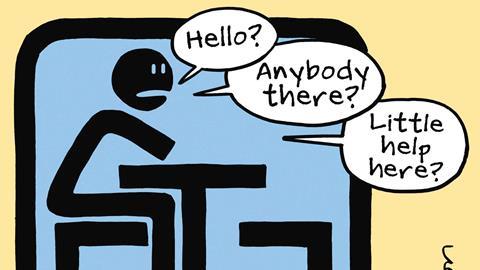 Adam Taylor analyses a clutch of cases in which the president of the Family Division considered how to deal with unrepresented litigants.

In The Rime of the Ancient Mariner, the eponymous narrator detains a guest on his way to a wedding, ‘holds him with his glittering eye’, and tells a long and extraordinary story which the wedding guest ‘cannot choose but hear’. Litigants in person (LiPs) can be rather like the Ancient Mariner – with a bin-liner or two of miscellaneous documents. The recent restriction of legal aid has forced more judges, including senior judges, to hear them.

The Legal Aid and Advice Act 1949, recently described as ‘one of the cornerstones of the welfare state’, established a scheme of legal aid intended to provide practical equality before the law for those of ‘moderate means’, as well as for the poor. At its height, the scheme covered the majority of the adult population and, at a cost of about £2bn annually, was, per capita, the world’s most expensive. Successive governments became concerned that the cost was escalating.

Over decades, the ambit of the scheme was narrowed: payments to lawyers were allowed to fall behind market rates; in 2000, claims for personal injury were removed; finally, the Legal Aid, Sentencing and Punishment of Offenders Act 2012 (LASPO) made parties in most family proceedings ineligible. Since many parties cannot afford representation without legal aid, the number of LiPs coming before the courts has grown.

There is a sense among the judiciary that something should be done. It was the question ‘what?’ which preoccupied Sir James Munby, president of the Family Division, in Q v Q; Re B; and Re C [2014] EWFC 31.

In each of the three cases considered together by the president, a mother opposed a father’s application for what used to be called ‘contact’ and is now a ‘child-arrangements order’. The father in Q v Q did not speak English and was a registered sex offender. In both Re B and Re C, the mother accused the father of rape.

In each case, the mother was represented, the father not. In Q v Q, the father could not afford an interpreter or translator, or the cost of bringing to court the two independent social workers who had written reports. In all three cases, the fathers faced tasks requiring legal training: the father in Q v Q needed to cross-examine the social workers; the fathers in Re B and Re C needed to challenge the grave allegations against them.

A further difficulty in Re B and Re C was that the mothers faced being cross-examined by their alleged assailants.

LASPO does not entirely abolish legal aid in family proceedings. A party who has suffered, or is at risk of suffering, domestic abuse, or whose children are at risk from the other party, will still be eligible. These exemptions allowed the mothers – but only the mothers – in the three cases to obtain representation. In addition, legal aid is still available in those exceptional cases in which refusing it would risk infringing a party’s rights under the European Convention on Human Rights.

The human rights relevant in the three cases were those under articles 6 and 8; the former gives a right to a fair trial within a reasonable time, the latter a qualified right to ‘respect’ for private and family life.

The president also cites the European Charter of Fundamental Rights, which requires member states of the EU to make legal aid available so far as necessary ‘to ensure effective access to justice’, and the ‘overriding objective’ in rule 1.1 of the Family Procedure Rules 2010, which requires the courts to ensure, ‘in so far as practicable’, that parties are ‘on an equal footing’.

What should a judge do when faced with a LiP unable to conduct his case? One answer is to take over the questioning. Schedule 10 of the Crime and Courts Act 2013 provides that if, in family proceedings, an unrepresented party cannot examine or cross-examine effectively, the judge is ‘to put to the witness such questions in the interests of that party as may appear to the court to be proper’.

Questioning witnesses is not a task which judges relish; whether the questioning is effective or ineffective, one party is likely to think that the judge has taken the other’s side. Most judges would agree with the president that ‘this is a difficult tightrope… to walk’ and that ‘where the issues are as grave and forensically challenging as in Re B and Re C, questioning by the judge may not be appropriate or, indeed, sufficient to ensure compliance with articles 6 and 8’.

If his or her questioning is insufficient to render a trial fair, what should the judge do? The obvious answer is to declare that it would be unfair to proceed, stay the case and await the determination of an application to the Legal Aid Agency for exceptional funding. If that fails, the litigant can challenge the agency’s refusal by applying for judicial review, though he would not, of course, be granted legal aid for this purpose.

But what if these steps fail? The president’s answer is unexpected: ‘If there is no other properly available public purse, the cost will have to be borne by HM Courts & Tribunals Service’ (HMCTS).

In an adversarial system, the representation of only one party almost inevitably creates unfairness. In cases in which they cannot redress the balance, judges may be emboldened by Q v Q to order HMCTS to pay for representation or meet disbursements. However, the president’s judgment leaves important questions unanswered: where does the power to make an order against HMCTS lie, what procedure should be adopted and how wide is the ambit of cases in which an order can be made?

It is important to note that, in all three cases, the president only gave directions. He did not make an order against HMCTS because, in Re B, exceptional funding had been granted and, in Q v Q and Re C, applications for exceptional funding were pending. Until a judge makes an order against HMCTS, the questions raised by the president’s judgment will remain unanswered.

All that seems certain at present is that, with LASPO in force, representation will be rarer; judges will find it more difficult to ensure that proceedings are fair and they can expect to be detained by LiPs more often than they might wish.

Adam Taylor is a district judge sitting in West Sussex