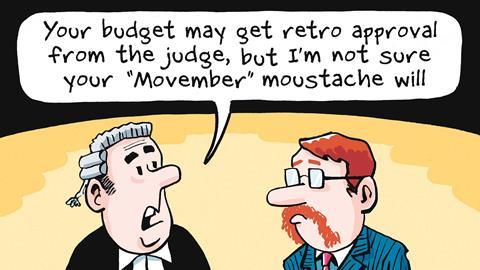 Part 1 of this article looked at the limited applicability of the decisions in Elvanite Full Circle Ltd v AMEC Earth & Environmental (UK) Ltd [2013] EWHC 1643 (TCC) and in The Board of Trustees of National Museums and Galleries on Merseyside v AEW Architects and Designers Ltd & Others [2013] EWHC 3025 (TCC) in relation to the variation of budgets approved in accordance with Civil Procedure Rule 3.15.

As noted in part 1, there are two alternatives open to a party who wishes to exceed their budget. Either they will seek variation under PD3E 2.6, or rely on the provision that allows the assessing judge to depart from the last approved budget if there is good reason (CPR 3.18). What issues will inform this choice?

PD3E 2.6 requires that a budget ought to be varied ‘if significant developments in the litigation warrant such revisions’. This immediately raises two thorny issues: when is a development ‘substantial’? And what is a ‘development’? Both terms are more complicated than might appear at first consideration. If a practitioner budgeted for 20,000 documents and 22,000 are disclosed, the budget is insufficient, but that is not the test. One has to ask whether a 10% underestimate is a significant development.

It is suggested that one of the challenges of the case management budget is that it is inflexible. Thus one might think that the courts will adopt a relatively low threshold for deciding if a development is significant. To adopt a high test would be to penalise a party for events beyond its control. Instinctively, one would feel that a new budget pitched 10% higher for disclosure ought to be agreed by the opponent or may well be granted on paper by a judge. The secret will be to ensure that the variation does not become blurred or confused by seeking any increase of more than the new development warrants.

Whether an issue is a ‘development’ is likely to engage issues of what was contemplated at the time that the last budget was set and what could have been reasonably foreseen. Is the application in reality an attempt to rectify oversights which occurred when the last budget was approved? This would amount to retrospective variation through the back door. As we have seen, the CPR and PD3E 2.4 specifically prevent such a step. There will always be a suspicion that the variation does not arise out of significant changes but out of defects in the original budgeting process. This emphasises the importance of ensuring that proper assumptions are attached to budgets.

If it can be shown that the budget was prepared on the assumption that there will be 20,000 pages of disclosure, then there can be little doubt that the production of 22,000 pages is a development (whether or not it is significant). Thus it is suggested that the assumptions should be as transparent as the case permits and that attention to assumptions will prove critical in seeking to show that the application for variation arises from a new development, as opposed to a matter which should have been included in the original budget.

Even assuming the above points are overcome, there remain difficult potential arguments of which practitioners need to be aware. The respondent may ask whether the applicant spent an unreasonable part of their existing budget. It is possible that the applicant will argue that they have spent a whole phase in the budget and now they need more when the respondent is suspicious that the work has not already been done. The obvious question is whether the applicant is trying to repair other overspent phases of the budget. It is suggested that practitioners and judges are tending to look at each phase as hermetically sealed. Indeed, they are encouraged to do this by CPR 3.18 and PD3E 2.3 which make it clear that the court will approve and assess costs by phases. Any costs lawyer will tell you that costing is an art not a science. If you see the client, go through the defence, update the draft proof and consider the documents which relate to the defence. Is that time spent on the pleadings phase, the documents phase or witness evidence? The truth is that once one has an injection of funds into the budget, time can be reallocated and overspent phases repaired.

It is also worth recognising that the wording of PD3E 2.4 appears to offer a small crumb of comfort for the solicitor faced with a new development and who needs to do some work in relation to the development. There is an argument that minimal permissible retrospection is permitted in PD3E 2.4. The provision prevents the court from approving costs incurred before the date of any budget – that is, there is a period of time after a new budget has been filed but before the court has adjudicated on the application when the wording of the rule would seem to permit retrospective approval. To avail themselves of this window a solicitor would have to make an application for variation and annex a new budget to the application as soon as possible.

At this point some of the decision in Elvanite may provide some guidance to the practitioner. As noted in part 1 of this article, any application to vary should be made swiftly. Coulson J addressed the issue in the following way: ‘When should an application to revise/amend a costs management order be made? In my judgement, it ought to be made immediately it becomes apparent that the original budget costs have been exceeded by a more than minimal amount… it seems to me that the defendant was taking a significant risk in continuing to incur costs which were so far outside the approved costs budget, without doing anything about the existing costs management order.’

This apparent window of retrospection may be illusory. There still remains the philosophical issue of whether any retrospective approval looks more like summary assessment. Indeed, there is an apparent conflict between the rules and the PD. Rules 3.12 and 3.15 specifically refer to the court managing and approving ‘costs to be incurred’. Looked at in isolation, this wording would seem to preclude even the small window of retrospection found in PD3E 2.4. Of course, in a conflict the rule should prevail.

As Elvanite makes clear, there is an alternative. Parties can simply breach their budget and rely on the provisions of CPR 3.18, which permits a party to depart from their budget if there is good reason. There are two difficulties with this option.

The first is that the outcome of the issue as to whether there was good reason may become fraught. One is bound to ask why no application to the court was made at the time that the budget was breached. If that option was open then it is difficult to see why there is good reason for the budget to be exceeded when the court’s prior approval could have been obtained.

The second difficulty is that reliance on CPR 3.18 will condemn the parties to a detailed assessment. It is beyond the scope of this article to examine how the assessment of costs has been altered by the April rule changes; however, practitioners have to bear in mind that proportionality will now prevail over reasonableness (see rule 44.3(2)(a)). The guidance is that the court will decide what is reasonable and then apply the proportionality test (effectively reversing the Lownds test so that the global assessment of proportionality comes at the end of the assessment). It is likely that the recoverable costs will reduce on a standard basis assessment in the future. It will be a brave party that seeks an assessment of costs in the new post-Jackson regime.

There remains a third option for a party facing a significant development where that development is the result of actions taken by the opponent. Assume that the party seeks to rely on video evidence of malingering or upon an amendment to a pleading that will open up new issues. A permissible response would be to seek to prevent the party from altering their case because it is disproportionate. One wonders what conclusion a judge would come to if the cost of the fourth amendment in Henry had been known when the amendment was sought. It is suggested that it is potent to offer the court an option: either grant my increased costs or refuse the opponent permission to rely on a costly step in proceedings.

Plainly, this area of the reforms is still a blank sheet awaiting guidance from the appellate courts. Because budgets are only now being approved, the first variation cases may be some time away. It will be apparent that those seeking to make or oppose such applications will need to be aware of the above analysis in seeking to decide what steps to take when a budget is no longer applicable.

District Judge Lethem sits at Tunbridge Wells County Court. He is a regional costs judge and a member of the Civil Procedure Rule Committee