A bad day for Jay J 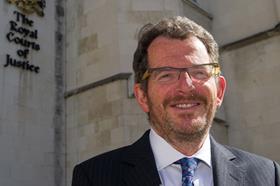 Mr Justice Jay is a brilliant lawyer and a powerful advocate. That is why, as Robert Jay QC, he was chosen by Sir Brian Leveson in 2011 to help run the public inquiry into press ethics. In 2013, he was appointed a High Court judge – sitting, inevitably, as Jay J.

Jay’s intellect is beyond doubt: the Supreme Court commended one of his decisions, running to 70 pages and completed little more than two weeks after a seven-day hearing, as ‘intricately constructed and beautifully written’. That was in a libel case called Serafin v Malkiewicz. When the Supreme Court ruled this month on an appeal in that case, Lord Wilson observed that Jay had concluded at the outset ‘that the claim was hopeless and that the hearing of it represented a disgraceful waste of judicial resources’.

That might have mattered less if the claimant had been legally represented at the hearing. An experienced advocate would have known how to respond when the judge expressed his views. But Jan Serafin, a Polish businessman who moved to England in 1984, had chosen to represent himself. Wilson, speaking for a unanimous panel of justices headed by Lord Reed, was utterly devastating about the way Jay had handled the case. ‘When one considers the barrage of hostility towards the claimant’s case, and towards the claimant himself acting in person, fired by the judge in immoderate, ill-tempered and at times offensive language at many different points during the long hearing, one is driven, with profound regret, to uphold the Court of Appeal’s conclusion that he did not allow the claim to be properly presented; that therefore he could not fairly appraise it; and, that, in short, the trial was unfair.’

Once the Court of Appeal had found that the hearing was unfair, it should have ordered a retrial. As Reed observed during the hearing, a judgment resulting from an unfair trial is ‘written in water’. An appeal court cannot base legal conclusions on any of it

That was bad enough. But the Court of Appeal then made matters worse.

Serafin had sued the editor of Nowy Czas, a small Polish-language newspaper, over an article which was said to contain 13 defamatory allegations. Jay was persuaded that eight were substantially true or harmless. The remaining five, he decided, were covered by a public interest defence introduced by the Defamation Act 2013. So Serafin lost.

His appeal was successful. But once the Court of Appeal had found that the hearing was unfair, it should have ordered a retrial. As Reed observed during the hearing, a judgment resulting from an unfair trial is ‘written in water’. An appeal court cannot base legal conclusions on any of it.

And yet that was what happened. The Court of Appeal sent the case back for another judge to decide what damages Serafin should receive. But that was presumably to be on the basis that, as the appeal judges had decided, only seven of the allegations were true and six were not covered by the public interest test.

No doubt the Court of Appeal had thought it was being helpful in saving the parties the cost of a retrial. In fact, it was depriving both parties of the chance of arguing against different aspects of Jay’s ruling. And now there are the costs of a second appeal. As Wilson said, ‘the justice system has failed both sides’.

Would Serafin now have grounds for a complaint to the Judicial Conduct Investigations Office? Complaints about bias and how a judge responds to a witness are not within its remit. But offensive language may amount to misconduct.

What, though, of the public interest test in section 4 of the Defamation Act? David Price QC, for the newspaper, wanted the Supreme Court to rebalance the test in favour of freedom of expression. He was supported by Heather Rogers QC for the Media Lawyers Association. Even Adrienne Page QC, for Serafin, conceded that some aspects of the Court of Appeal ruling were ‘at least unfortunate’.

Price persuaded the Supreme Court that the Court of Appeal had got several things wrong. Failure to seek advance comment from the subject of a story was not a mandatory ‘requirement’. The government’s explanatory notes to the act, which said section 4 was intended to codify the so-called Reynolds defence, were misleading.

But anything the Supreme Court could say on section 4 must surely be obiter – persuasive, but not necessary to the court’s decision and therefore not binding. Wilson was therefore ‘driven, with a degree of embarrassment in relation to respected colleagues, to suggest that the new judge should determine the availability of the public interest defence’ without reference to the Court of Appeal’s reasoning.

It was the family lawyer James Turner QC who set Twitter alight by observing that Wilson had taken the trouble to refer to ‘editorial judgement’ (following the spelling in the statute) but the court’s judgment (following conventional usage). Many of my followers recalled being taught, as students, that a judge uses judgement to write a judgment. News to me; but perhaps I am too judgmental.