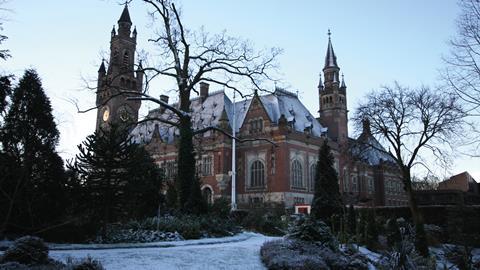 A tale of two courts – Ukraine looks to The Hague

It seems right to start with emails from ‘Lana’ (not her real name), a Ukrainian corporate lawyer in Kyiv. ‘I will get back tomorrow,’ she wrote, in reply to my email. ‘Kyiv is expecting mass shelling tonight. So tomorrow I hope.’ That was Thursday 24 February.

Two days later, Saturday 26 February, she was in touch again. ‘We need more support and media coverage about Putin’s war in Ukraine. Raise your voice for further support of Ukraine,’ Lana’s email said. ‘Shelter our sky, cut off Swift, give us weapon. Freeze Russian money… This level of support we need.’

She continued. ‘Otherwise we have everything we need. The truth and the Lord are with us. We will fight and win! Bunker or sentence of the criminal tribunal in The Hague - Putin’s only choose. You can’t even imagine how strong is the spirit of Ukrainian army. We will never give up. Never.’

As an ordinary Ukrainian citizen, Lana presents the western powers with a formidable shopping list. ‘Shelter our sky,’ rather got me. It’s the one thing which definitely won’t happen.

Still, on 26 February, the EU, US and allies agreed to freeze the assets of Russia’s central bank and cut off many Russian banks from the Swift international payments system.

Then on 28 February, the Council of the European Union sanctioned 26 new persons and one business, taking its list of restrictive measures to 680 individuals and 53 ‘entities’.

On the same day, the International Criminal Court’s (ICC's) prosecutor Karim Khan QC announced his intention to open an investigation ‘into the situation in Ukraine, as rapidly as possible’.

For anyone eventually indicted by an international tribunal like the ICC, the road to a trial at The Hague is a long one. Even now, with all 165 indictees of the International Criminal Tribunal for the former Yugoslavia accounted for (dead, acquitted, or found guilty and sentenced), court filings to its legacy court continue. The most recent was on 23 December 2021 – more than 27 years after the Srebrenica massacre of 7,000 Muslim men and boys.

ICJ: The Hague’s other court

More on the ICC’s work below. For now, another international court based in the Hague, the International Court of Justice, the principal judicial organ of the United Nations, will hear an application and request from the government of Ukraine on Monday and Tuesday next week.

What the ICJ decides may assist the work of the ICC later. Or not.

In Ukraine’s application it, ‘emphatically denies’ Russian government allegations of ‘genocide’ in the ‘breakaway’ areas of Luhansk and Donetsk, whose sovereignty Russia recognised as a prelude to invasion. However disingenuous his case, this is Vladimir Putin’s cassus belli. Ukraine is seeking the ICJ’s imprimatur on its own denial.

If the ICJ finds for Ukraine, Russian commanders and soldiers on the ground should take note. Ultimately the lawcraft of modern warfare matters. ‘I would not go anywhere now,’ the British Army’s Brigadier Ginn told the Gazette in June 2020, ‘on any operation without a lawyer by my side.’

That is not, though, the immediate point of Ukraine’s application. A ‘request’, dependent on that application asks the Court for ‘the indication of provisional measures… in order to prevent irreparable prejudice to the rights of Ukraine and its people and to avoid aggravating or extending the dispute between the parties under the Geneva Convention’.

In other words, compliance with such a ruling, for Russia, would involve the cessation of Russian military operations in Ukraine.

ICJ decisions are legally binding on parties, and cannot be appealed. Unlike UN Security Council resolutions its judgments cannot be vetoed.

But of course, the world’s top court lacks enforcement mechanisms. Others could act citing its authority – such action itself develops international law – but other states do not seem likely to act directly here, even if the court finds for Ukraine.

That being the case, what is the point of going to the ICJ? Well, the application puts down a marker. The request uses the springboard of the application.

Ukraine’s lawyer Covington & Burling partner Jonathan Gimlett tells me: ‘The President of the Court has called publicly on Russia not to act in a way that would impede any order the Court eventually makes.’

The ICJ seems to have responded to the urgency. To obtain a hearing at a week’s notice is unusually fast. The court ordinarily rules on provisional measures two to three weeks after a hearing. But Gimblett says that Ukraine hopes it will act more quickly on this occasion, given the urgency of the situation.

One can also see Ukraine’s use of the ICJ as showing it is a good citizen among the community of nations. Ukraine has filed a number of cases at the ICJ since 2016. As well as seeking determinations in its favour, it also shows that there is a judicial component to their response.

Russia has no consistent approach to attending international tribunals as a party. Sometimes it participates; sometimes not.

And so back to the ICC, The Hague court Lana dreams of Putin arriving at (though a specially convened tribunal could also be created). Neither Russia nor Ukraine are state parties to the ICC’s statute, though Ukraine’s government gave the court jurisdiction to investigate crimes committed on its territory in 2013.

Ukraine appealed for an ICC state party to make the necessary referral to allow the ICC to proceed without waiting for the Court’s approval, a call which 39 state parties answered. Late last night (2 March) the prosecutor announced he would immediately open an investigation.

This is not the only route to justice, Red Lion Chambers consultant Mark Guthrie tells the Gazette, as in theory Ukraine could itself put indictees on trial. (Guthrie worked for the Organisation for Security and Cooperation’s mission to Bosnia Herzegovina as senior human rights officer and rule of law adviser.)

But it is important that the ICC’s prosecutor has opened the investigation, Guthrie says. There are lessons for a successful prosecution from past tribunals, he adds: ‘There has to be the political will… and there has got to be international support.’ The prosecutor has appealed for extra resources needed for the ICC to properly investigate.

For all that the crimes committed in Ukraine seem obvious to onlookers, Guthrie stresses the importance of evidence gathering. ‘The main thing is, it needs documenting. The people on the ground should try to make a record – make notes, record.’ The easy availability of smart phone videos is helpful here, he adds.

And, Guthrie points out, evidence has been gathered on alleged crimes committed since Russia’s 2014 invasion of Ukraine, often with the support of UK lawyers. And while the focus is on Putin and his generals, there are no exemptions for junior ranks who were following orders. All ranks have accountability.

None of this, of course, is of immediate assistance to my contact Lana. But alongside protection and security for Ukraine, she also seeks justice. And while any result is likely a long way off, the wheels of justice have started turning.