Balfour and the law

Of all the policy decisions taken in office by David Lloyd George, the UK’s only solicitor prime minister, just one has the power to provoke passionate, even angry, controversy today. Of course I’m talking about the Balfour declaration, published 100 years ago next week. The hot air it still generates serves as a proxy for the disproportionate emotion attached to a tiny, and probably intractable, territorial dispute in the Middle East.

I experienced some of this a couple of weeks ago when I tweeted that I was attending a legal conference celebrating the centenary. (It is symptomatic of the sensitivity surrounding the issue that the law firm hosting the conference asked me not to name it.) Within seconds a friend had popped up demanding to know what the hell there was to celebrate.

I’ll come to the reasons in a moment, but first the facts.

The 2 November 1917 declaration, signed by the coalition government’s foreign secretary, Arthur Balfour, was a 67-word open letter stating that the government viewed ’with favour the establishment in Palestine of a national home of the Jewish people… it being clearly understood that nothing shall be done which may prejudice the civil and religious rights of existing non-Jewish communities…’.

The author of a recent popular history (I’ll give his name at the end) described the declaration as ’exquisite masterpiece of Foreign Office fudgerama’. I'm not sure that's fair. The declaration was the third in a series of promises made about the future of the Ottoman Empire, in the expectation of defeat by British and French forces. The first was the promise of independence to desert Arabs under the Sharif of Mecca, the second the infamous Sykes-Picot agreement which divided the Middle East into British and French spheres of influence, along a literal 'line in the sand'. Preposterously, the British-sphere Arab states were supposed to become constitutional monarchies and those in the French sphere republics. The region's non-Arabs, notably the Kurds, were ignored. 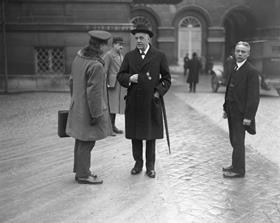 By the duplicitous standards of its predecessors, Balfour's declaration was a model of transparency and humanitarian concern. That's worth celebrating in itself.

Of course it had its shady side. Britain had no legal title to the palm trees it was cheerfully flogging for the third time, and at the time of the declaration was not even in possession on the ground. The declaration was aimed mainly at the Jewish community in the United States, which was alarmed at the wartime alliance with Imperial Russia, itself a cradle of antisemitism. Lloyd George's motive for publishing it were summed up by his predecessor Asquith, who said the prime minister ’does not care a damn for the Jews’ but feels that it would be an outrage to let the holy places pass to the hands of ’agnostic, atheistic France’.

Emphatically, the declaration had no legal force. However, three years later its language was incorporated into League of Nations resolutions for the establishment of mandated territories, including that of Palestine. This framework was carried over into Article 80 of the UN Charter, which preserved intact the rights of Jews in Palestine after the British walked away. Hence its status, US constitutional lawyer Professor Alan Dershowitz told last month's conference, as the modern state of Israel's birth certificate.

To me, that's another reason for celebration, though some of my friends (and my own younger self) would disagree.

This is why people are still banging on about the Balfour declaration, 100 years on. Of all the UN member states created in the chaos and tumult of the collapse of empires after the world wars, only one has its very legitimacy repeatedly challenged. The irony, Dershovitz told the conference, is that Israel has a more solid legal foundation than almost anywhere else in the world. 'Israel was established by the pen and the law,' he said. That is also a principle worth celebrating.

Oh, and the author of the ‘fudgerama’ line? One Boris Johnson, who, for the time being at least, occupies Balfour’s old office as secretary of state for foreign affairs. History has a way of coming back and biting.