There is good and bad news for solicitors in the UK-EU trade deal that was finalised on Christmas Eve. Of course, as with everyone else who is commenting quickly on the outcome, my views are subject to future careful scrutiny of many sub-clauses, which will take place over the coming weeks. But the outline of the impact on legal services is now clear.

The good news is very good. Legal services are picked out as one of a handful of services that feature in the deal. It is a commonplace to point out that the agreement largely covers trade in goods, whereas around 80% of our economy is based on services. Yet a few services are given their own section, and legal services are one. The others are delivery, telecommunications, international maritime transport and financial services.

It is an achievement that legal services have been recognised in this way. It is only the only profession to be given such recognition. Congratulations are due to the Law Society for its incessant lobbying, and to the Ministry of Justice for supporting the case. In terms of numbers of pages in the deal, I calculate that services cover less than 5% of the text, which makes the inclusion of legal services even more remarkable.

The government itself, in its internal scorecard which was released just before the deal was finalised, awarded legal services to itself as a win. The prime minister himself referred to access for solicitors and barristers as a plus (more on the reality of this below). 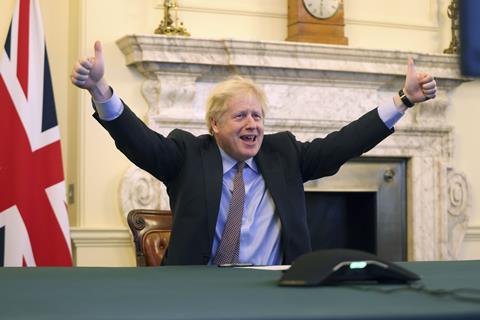 As others have pointed out, the overall deal is largely a defensive outcome for both sides, who were protecting their core interests rather than pursuing offensive asks. The UK government claims that the EU did not want provisions covering our sector, and there now are some, which it believes will improve the clarity and certainty of our market access. So legal services are one of the wins on the offensive side.

Of course, the detail is important – that comes next – but it is now more likely that legal services will be covered in future trade deals with other countries. In other words, the profile of legal services has been significantly raised by this deal in terms of UK overseas trade, a win for our profession.

The bad news is as bad as the good is good, but does not seem so bad because we have known about it for months, more or less from the time when the government made clear that services would not be a major target in the negotiations. It was clear then, and the Law Society kept saying this, that whether there was a deal or not would not make a significant difference to solicitors’ EU market access (of course it would make a difference to other things).

To understand the negative impact, we need to understand what has been lost. Solicitors had extensive access to EU legal markets during our membership of the EU. Solicitors were able to establish under home title in any member state, and offer advice in home or host law, including EU law. They were also able to provide temporary cross-border legal services, without the need to register with the host bar. They were able easily to gain the title of lawyer in another member state, either by three years’ practice of that state’s local law (including EU law), or by sitting a few examination papers without ever establishing in the other state. There was more, too.

This suite of rights was broader than that granted anywhere else to solicitors abroad, and is unlikely ever to be equalled.

The government says that ‘the agreement includes provisions on home title legal services’. Yes, that’s true. But the government also includes a footnote next to this claim, the only footnote in its whole summary of wins and losses. You need to scroll through 17 pages to find it: ‘The substantive provisions reflect current [member state] domestic rules which will not change as a result of the agreement. However, this inclusion does improve the transparency of these restrictions and raises the prospect that if MS domestic rules change in future, they will be locked in’.

In other words, what is given in the main statement is eroded by the footnote. We have mainly achieved transparency and possible future lock-in. There will not be a harmonised EU-wide right when the deal kicks in, because individual member states retain existing rules for how third country lawyers may practise in their jurisdiction. So how you are able to exercise your right – for instance, through what process and under what further restrictions – will remain within the domain of the member state in line with its existing restrictions.

The restrictions are contained in one of the many annexes to the text of the agreement. Good luck to intrepid lawyers who want to find out whether they can exercise their right to provide legal services – they are found in the dense and technical pages starting on page 544 of the deal, and going on to page 555 (the last couple of pages devoted to patent lawyers).

Luckily, the Law Society has undertaken a study of 10 leading EU markets, and produced excellent guides with more detail in its End of Transition Hub. The Institute for Government, in its summary of the deal, has given examples of how these restrictions will work out in practice for legal services.

If you look at the actual wording in the section in the deal relating to legal services, which is in Section 7 of Title ll of Part Two (starting on page 113), you will see that there is a basic right for solicitors to offer ‘home jurisdiction law and public international law, excluding Union law’ in the EU, subject of course to the restrictions mentioned above.

This is in fact little different to the right which European lawyers, through the Council of Bars and Law Societies of Europe (CCBE), have been proposing to the European Commission for years as the basic right in legal services in a future GATS round at the World Trade Organisation.

It is a minimum right, limited to home law and public international law, losing the right available under EU membership to advise on host state law and EU law, and subject to domestic restrictions (set out in the annex) which did not apply before. Nevertheless, it is something – and the fact that it is in the deal is a great advance. The Law Society has promised new guidance to the profession once it has had the opportunity to absorb the consequences of the deal.

There are important issues for lawyers that are not covered in the deal. Even the UK government accounts it a loss that it has obtained no more than a Canada-style deal for the mutual recognition of professional qualifications, with just a framework for future recognition rather than a detailed pathway with comprehensive coverage.

This will make it more difficult for individual solicitors to go beyond the basic right above, since their qualifications will not be automatically recognised, as they have been to date - unless and until the Partnership Council (the new body set up to deal with future UK-EU relations) approves a detailed system for mutual recognition in the future. For the avoidance of doubt, the Withdrawal Agreement guarantees the mutual recognition for UK citizens already living in the EU before the end of the transition period, which ends this week, and vice versa.

Additionally, civil justice – for instance, the mutual recognition of court judgments - is not in the deal.

Other topics which are in the deal and will have an impact on legal services, such as the provisions on domestic regulation or intra-corporate transferees, will need much more careful scrutiny before a judgement can be made on their impact on our profession.

The question is whether the good and the bad balance. Yes, legal services are included, which is excellent. But the provisions themselves do not amount to much more than would have been available without a deal. Since Brexit is about so much more than legal services, the final judgement depends on how you regard Brexit in the first place, as a loss of rights or as a gateway to a brighter global future.