Byron burgers – what we have learnt

Irrespective of how one feels about the immigration ‘sting’, employers must understand what the law demands.

The recent Home Office raids at several Byron restaurant locations drew strong responses on both sides of the immigration debate. While some were angered by reports that the business allegedly lured employees to immigration stings on the false pretence of training, others expressed bewilderment that compliance with the letter of the law was so sharply criticised.

The raids resulted in the arrest of 35 employees from Albania, Brazil, Nepal, and Egypt, though Byron was ultimately cleared of fault, as it had complied with right-to-work check requirements and cooperated with the government’s investigation.

Independent of one’s position on how the situation was handled, employers must understand what the law demands with regard to right-to-work checks and record keeping for all employees, as well the significant consequences of failing to meet these requirements.

The criminal offence of knowingly employing a person who is not authorised to work in the UK was set out in the Immigration, Asylum and Nationality Act 2006, which also introduced a civil penalty scheme with a maximum fine of £10,000 per unauthorised worker. Eight years later, the Immigration Act 2014 doubled that fine to £20,000. 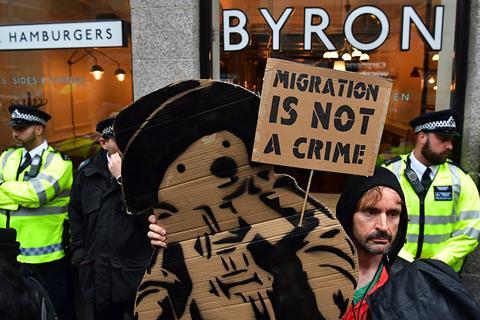 The 2016 act, relevant parts of which recently came into force, extended the requisite intent of the criminal offence from ‘knowingly employing’ an illegal worker to also include employers who have ‘reasonable cause to believe that the employee is disqualified from employment by reason of the employee’s immigration status’.

Those convicted on indictment could receive a maximum custodial sentence of five years (increased from two years).

Additionally, in some instances, paid wages could be seized under the Proceeds of Crime Act 2002.

As the penalties for the offences are severe, employers should be aware of the steps they must take before they employ an individual, which establish a statutory defence that protects them from civil and criminal liability. These include:

When checking the documents, employers should ensure the following:

In the case of Byron, although the business conducted the appropriate right-to-work checks and retained adequate records, the employees in question apparently provided them with false documents. Byron’s compliance, however, which established a statutory defence, as well as its cooperation with the Home Office investigation, shielded it from civil and criminal penalties.

As the Home Office continues to crack down on illegal working and employment, and with its approach likely to toughen in light of the appointment of Theresa May as prime minister, it is vital that employers understand how to undertake adequate right-to-work document checks and keep accurate records in the event an audit or immigration action should occur.