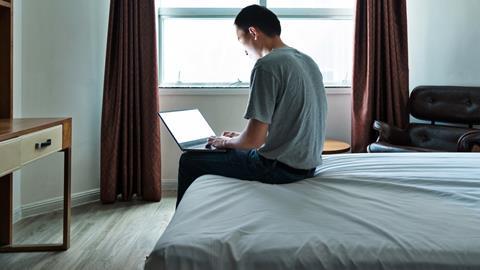 Check in on your isolating colleagues - they may need it

These comment pieces tend to be inspired by a snatched conversation at a function, a coffee with a contact or (occasionally) something overheard in the pub. It’s not unknown for me to open the inbox in the morning with something cryptic like ‘costs nightmare’ or ‘MoJ problem’ sent to myself at 1am, and the challenge then of trying to work out what it was that needed writing about.

Right now, the only inspiration is the four walls of a bedroom, where I have been confined since a most inconvenient positive lateral flow test on New Year’s Eve. A day later: confirmation of a positive test, just like almost 200,000 people on the same day. No symptoms, feel fine – thanks for asking.

The rest of the household is mercifully testing negative, so for now I am ensconced in one room, with three square meals brought to the door every day and masked access to the garden carefully arranged once a day when the others are safely out of the way.

None of which is to ask for sympathy or offer any particular legal insight, except to observe that this must be the case for hundreds if not thousands of law firm staff across the country.

From Christmas get-togethers and a gradual return to the office in the latter half of last year, 2022 has begun for many with tedium and monotony – cut off from human interaction, save for the pixels of a screen and colleagues staring back at unkempt hair and yesterday’s clothes.

Personally, I’m holding up. A monthly NOW TV subscription has helped and isolation at least gives me a chance to think about doing those jobs I should have done weeks ago (I will definitely consider pondering whether to renew the family passports tomorrow).

Work was a welcome distraction, but it’s not easy. Inspiration is difficult to muster within the same four walls that you sleep, eat and exercise in, and even the simplest of tasks feels like a huge effort. The end of the first day ‘back’ felt draining, despite it being a relatively quiet one.

If I were a law firm boss whose employee was in this position, I would assure them that for their isolation week, nothing is expected of them. If they are poorly, then rest. If they are struggling then take a break. A week’s lack of output is a small price to pay for an individual’s long-term wellbeing.

It’s always worth reminding those isolating that they are not forgotten about. It doesn’t matter how you do it – perhaps a video message from colleagues, perhaps a packet of Haribo through the post – but contact with those on the outside could be invaluable. Even just a quick email or text to check in and make sure they’re OK could be just the tonic for someone craving human interaction.

So, I count down to Saturday (at best) or Tuesday (at worst) to come out of this bedroom and a return to bedtime stories, mopping the kitchen and ferrying kids to karate classes. Can’t wait. Hopefully then I’ll have some legal insight to offer.

In the meantime, channeling the words of Jerry Springer, I would simply urge you to take care of yourselves and each other. If stuck in isolation, go easy on yourself. If you know someone locked away, check in and make sure they’re holding up. The smallest thing could make their day.