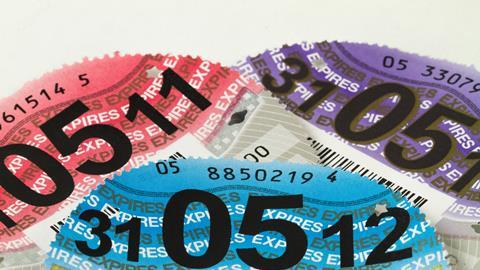 Dodgy motors and the lure of the modern

Up to three years ago, a rough and ready check of the dodginess of a motor vehicle was whether it had an in-date vehicle excise duty disc in the nearside corner of its windscreen. What everyone called the tax disc indicated that, at some point in the past year, the vehicle had been shown to be registered, insured, and, if more than three years old, passed an 'MoT' roadworthy test. It was by no means a guarantee that the vehicle was currently legal, but when one without a disc ran into the back of you or was parked across your driveway, extra alarm bells would ring.

Certainly a lesson I should have learned after purchasing a clapped-out 1965 Bedford van with a Guinness bottle label in the windscreen. ’It looks OK in the dark and you might get a copper with a sense of humour,’ said the vendor, stuffing my £30 down his sock.

To the 21st century bureaucratic mind, the whole tax disc ritual was an anachronistic abomination. When the government set out to identify possible cash savings from computerising, the tax disc leaped out as the perfect example of low-hanging fruit. The apparatus of printing, securing and issuing paper discs cost at least £10m a year. Moving the whole process into cyberspace would be good for the public purse as well as law enforcement: computers can’t be fooled by beer bottle labels.

Of course it didn’t go as smoothly as that. A national infrastructure for automatic number plate recognition (ANPR) had to reach critical mass, amid widespread civil liberties concerns. (The technology was first deployed in the 1990s to check vehicles rolling on and off Irish ferries.) Databases for insurance and MoT records had to be joined up with vehicle registrations. The computerisation of thousands of railway-arch garage premises proved particularly problematic.

However, the chickens didn’t really come home to roost until the time honoured ‘fixed to and exhibited’ requirement was abolished in October 2014. I rejoiced in removing mine, for the tiny extra visibility, but I noticed most people - superstitiously? - kept them showing. In the next 12 months, the sum of money collected in vehicle excise duty plummeted by £412m over the previous year.

More worrying, figures released this week show that the number of penalties levied for not paying the tax has more than doubled in three years. Many defaulters will be chancers, but motoring organisation the AA believes a significant number are people who simply forget to renew or make innocent mistakes such as not realising that there is zero period of grace when acquiring a vehicle. It is calling for a proper appeal process: ’At the moment you’re either guilty or not guilty,’ a spokesperson says. ‘There needs to be some leeway.’

Should we bring back the disc? Probably not, but at a time when the whole future of the motor car is up for discussion, the question should certainly be in the mix. My suggestion would be to require the display of a sticker along the lines of the French vignette, showing the vehicle was insured. It might also include microchipped details for use in case of an accident. Of course it would be meaningful only if the vehicle was insured for any authorised driver - another change I would like to see, even though it would put my personal premium up.

But the real lesson is that cost-cutting governments should be wary of apparently straightforward technology-based efficiencies. Such as online courts, for example. The real world is a messy place, which is largely why governments became involved in the first place.

My £30 Bedford van? I managed to drive it home, smoke pouring from every gasket, without getting nicked. It never rolled again, though, ’til the council tow-away came. Lesson learned.