Explaining justice to the public

Operating 900 miles away from the region over which it has jurisdiction creates a very particular set of challenges for the International Criminal Tribunal for the former Yugoslavia (ICTY).

Communicating with those it was set up to serve comes high up the list. The tribunal’s outreach staff are on the frontline of efforts to ensure that the people of the former Yugoslavia hear about and understand its work.

The Tokyo and Nuremberg tribunals did not engage in outreach work. Neither do national judiciaries, which as a rule do not face issues of ownership, credibility and political manipulation. For the ICTY it’s a different story. Our staff have pioneered outreach projects to ensure that proceedings at the tribunal are meaningful for the people of the former Yugoslavia, in keeping with its original mandate to contribute to the restoration and maintenance of peace in the region.

The tribunal has come a long way from the early days when court documents were all in English or French and a 1,800-mile round trip was necessary for anyone from the region who wanted to see a trial. Our trials have been streamed online since 1999, and all public court records are available in Bosnian/Serbian/Croatian to anyone with an internet connection.

The outreach team in The Hague reaches out to young people on social media. During June 2011, our YouTube channel brought the ICTY courtroom into the living rooms of over 40,000 people in the former Yugoslavia who watched the initial appearance of the Bosnian-Serb army general Ratko Mladić.

On the ground in Sarajevo and Belgrade (and until 2012, Zagreb and Pristina), our work is less straightforward. Our outreach officers face the task of bridging the gap not only between the region and The Hague, but also between people’s expectations and what the tribunal can deliver. Officers encounter the frustration of victims who want the tribunal to indict more people and to speed up its trials, and are angered by acquittals. 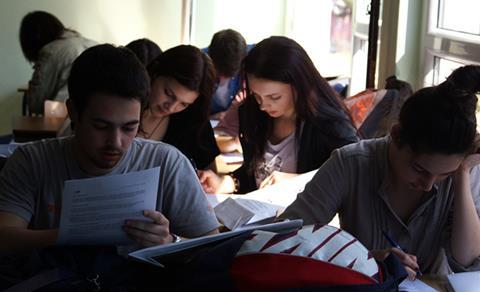 Although the international community has moved on from the conflicts in the Balkans, for those living in the region, it’s the recent past. Our officers can still be trailed and documentary screenings prevented by groups of threatening young men. They have presented the ICTY’s work to students in T-Shirts portraying ICTY indictees as heroes and have pressed on after the group’s teacher left the room in anger.

Our officers must take this frustration ‘on the chin’ and find satisfaction in people’s engagement with the work of the tribunal.

Such engagement can bear rich fruit. The screening in Prijedor in Bosnia and Herzegovina of outreach’s documentary on the wartime prison camps in that area took place at 2am. It was during the Ramadan Iftar, and Ed Vulliamy, one of the journalists who broke the story in 1992, was in the audience. The electrifying silence that held throughout the film was followed by cheers and applause once the credits rolled. The documentary director recalls one former camp inmate coming up to shake his hand, telling him: ‘This is it. This is our story. At last it’s been told.’

These highpoints aside, success is usually achieved in smaller steps and often involves young people who can be the motors of reconciliation in post-conflict societies. The first victory can be the very fact that children normally taught apart are sitting unsegregated in the same hall to hear our presentations.

High school sessions often evolve past muted beginnings to reach the real prize; question after question after question. On less successful days, when youngsters seek only to joke about what’s on the menu at the detention unit, or to find out which detainees play chess together, a note of gratitude in a feedback questionnaire lets us know that beneath the bravado, there are young people in the region working for change. For them, the tribunal’s support is a lifeline.

On a final note, I’ll return to The Hague where job satisfaction can also be found in the simple pleasure of working effectively alongside colleagues from across the former Yugoslavia.

Serbs, Croats, Bosniaks, Montenegrins, Slovenians, Albanians and Macedonians come together to seek to make a small but crucial difference to their communities back home, leading to bittersweet reminiscences about the former Yugoslavia and thoughts of what might have been.

The Outreach Program benefits from the continuous support of the European Union and its work with young people is generously supported by the Finnish government.

The International Criminal Tribunal for the former Yugoslavia was set up in 1993 during the conflicts in the region. It has jurisdiction over the war of 1991-5 and the later conflicts of 1998-2001 in Kosovo and Macedonia. It has indicted 161 individuals all of whom have been accounted for. Four trials are still ongoing, including those of two of the most senior figures indicted: Radovan Karadžić, former president of Republika Srpska, and Ratko Mladić, the former general of the Bosnian-Serb army.

Kate Mackintosh is deputy registrar at the ICTY

Co-author Joanna Ellis Adwan is press officer at the ICTY