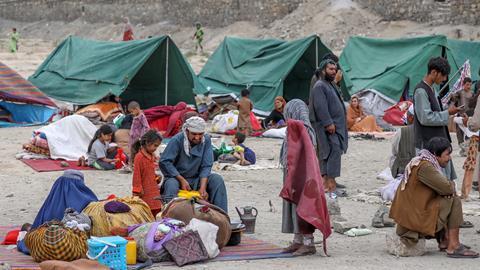 Monday’s grim news headlines included the fact that the UK ambassador to Afghanistan remained at Kabul’s international airport to personally process paperwork and issue visas to Afghans with the right to come here.

Those with a humanitarian streak will be hoping he is acting as some previous British diplomats did in the 1930s, ‘bending the rules to save souls’, as FCO historian Tara Finn puts it, in order to rescue victims of Nazi oppression.

That is needed because, in the circumstances, not everyone with a right and need to come here from Afghanistan can locate all the right paperwork.

It is, after all, only with the extreme events of this week that the government is theoretically more open to honouring obvious obligations to these people.

I say theoretically, because a scheme and criteria are only now being drawn up to meet our obligations after Kabul fell to Taliban. It is an extreme example of policy made on the hoof. The government waited so long to act that it saw the Taliban in the rear view mirror as it sped away.

It is worth reflecting that some of the extreme time pressure on our man in Kabul, Sir Laurie Bristow, faces in trying to see Afghans who worked with us to safety, is the end result of three-plus decades spent developing UK laws on asylum seekers and refugees.

The government dragged its heals, and for many people it is now to late. They simply cannot get out.

UK practice, regulations and laws have developed with one policy objective in mind – to work towards a point blank refusal to allow people into the UK before considering their status. For those who manage to reach the UK, the official hostility they face is the toxic backstop intended to sure up that policy.

Appeals from MPs, including Conservatives who served in Afghanistan or who know the country well, to allow the translators and contract workers whose work supported our presence in Afghanistan fell on deaf ears.

Supporters of human rights law and the principles that underpin it naturally single out the home secretary and prime minister for criticism. Priti Patel and Boris Johnson, however, are simply the latest – though perhaps the crassest – holders of high office to push the idea that in-country applications for asylum are a problem.

Among other prime ministers, count Thatcher, Major, Blair, Brown, Cameron (supported by Clegg), and May. This has been going on my whole adult life.

It is 32 years since I read an article outlining our shift from non refoulement, the fundamental principle of international law that forbids a country receiving asylum seekers from returning them to a country in which they would be in likely danger of persecution, to a policy of non entrée.

Under non entrée a country tries not to let people in in the first place. It therefore does not need to consider their case or its own obligations under international law.

To enforce non entrée, airlines, trucking companies and ferry owners had new responsibilities placed on them, backed by a variety of potential sanctions, to prevent them knowingly or unwittingly providing passage to the UK.

In 2002 I was surprised returning to London from Prague to have my British passport checked by a UK official before being allowed to board the plane home. A benign experience for me, it was of course a small example of one of non entrée’s enforcement mechanisms. A Labour government doing its best to avoid considering a person’s status once they were in the UK.

This week it does not feel controversial to say I hope as many get out of Afghanistan who can, escaping Taliban forces and a regime that on past form will persecute people who worked with the coalition forces. And there are many, many other categories of person also at risk.

Most people will be hoping Sir Laurie’s rubber stamp issues many, many visas.

But last week it was controversial to make such an argument, which flew in the face of that three-decade long project to realise the UK’s dream of non entrée.