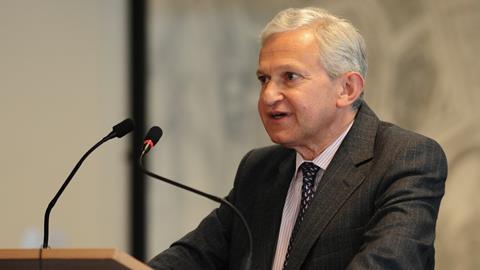 Nearly 60 years ago, President John F. Kennedy set the gold standard for visionary technological ambition with his 'We choose to go to the moon' speech. The Rt. Hon. Sir Geoffrey Vos is no JFK (fortunately, perhaps, for the reputation of the judiciary). His speech yesterday setting a direction of travel towards an online integrated civil justice system was delivered with the master of the rolls' characteristic steely logic rather than high-blown rhetoric.

But in a way Sir Geoffrey's words were as visionary as those that set the USA on the race to the moon. They certainly deserve close attention from the legal community.

In 41 numbered paragraphs, the new master of the rolls sets out an ambition for every one of the estimated 3 million civil claims initiated every year in England and Wales to start its journey through 'a single online funnel'. The system would then direct each claim to the appropriate channel, including mediated settlement, online resolution by a judge and, for a tiny minority, a physical court hearing.

At first sight it may seem bonkers to create a single system handling everything from a multi-billion dollar global patent dispute to a consumer's grumble about sawdust in the gearbox of an 11th-hand Vauxhall Astra. Indeed Sir Geoffrey concedes that business and property disputes will probably need to come out of the funnel 'at quite an early stage'. But there are good reasons for integration - and not that it preserves the illusion that our dodgy motor dispute is potentially another Donoghue v Stevenson, bound for the Supreme Court and beyond.

A big one, emphasised by Sir Geoffrey, is that the one-stop shop would for the first time enable us to understand what is going on, by creating a single data set for each dispute as it passes through the system until resolution. At the moment the lack of reliable data about cases in the system - never mind the great majority of disputes handled elsewhere - is the Achilles heel of the much vaunted courts reform programme. 'A system cannot be improved unless one knows... how it is currently performing,' as Sir Geoffrey puts it. This knowledge can also be put to good use in identifying gaps in access to justice and developing ways of filling them, especially through machine-learning 'artificial intelligence' technology.

The vision also fills another glaring gap in the courts modernisation programme: the current lack of any comprehensible goal. It is telling that the programme is most frequently described, especially by ministers, in terms of inputs not outcomes. If the most exciting thing about the programme is that it costs £1bn, we are in trouble - just as we found ourselves under the last Labour government when it set a target for the NHS to quadruple its spending on computers.

But this goes wider than the justice system. As the master of the rolls says, an efficient debt recovery system is crucial for the UK economy. 'This is an opportunity for the UK to lead the world in showing how a mature first world justice system can make full and effective use of technology to allow legal rights to be cheaply and quickly vindicated.'

Can it be done? Falling back on a tired cliche, Sir Geoffrey said that, at least for the time being, the necessary technology 'is hardly rocket science'. Actually, to risk a small digression, the Apollo moon programme wasn't really about rocket science, either. Rocket science was largely sewn up with Newton's third law of motion, published in 1687. The moon programme was rather an awe-inspiring triumph of engineering, including computer engineering, some of which will be applied in Vos' funnel.

But good engineering alone is not enough to guarantee success. Large-scale IT-based programmes have to deal with the complexities of human behaviour as well as the certainties of the laws of physics. Luckily, believe it or not, we have learned how they can succeed. The basic ground rules are:

Finally, and perhaps most difficult for lawyers and civil servants alike:

So, will it be done? Sir Geoffrey's speech concedes that we are talking about a fundamental generational reform of the civil justice system - and that he is not so naïve as to think that this can be created overnight. As head of civil justice, he hopes merely to establish a direction of travel. But he offers nothing on who is going to make this direction of travel a reality. To gain real traction it will need leadership from more than a 'top judge'. Someone who appreciates that we stand at the lip of an economic abyss: the Covid vaccine is not the end but only the beginning of the end of the catastrophe. Someone who appreciates that, as the lights go out all over the world, now is the time to build the infrastructure for recovery. An effective, accessible civil dispute resolution is a small but key part of that infrastructure.

Perhaps a JFK is waiting somewhere in the wings?