Liz Truss clearly learned nothing from her 11 months as lord chancellor and justice secretary. 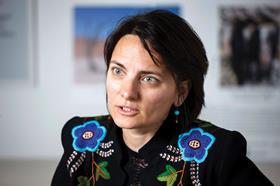 Speaking yesterday at the Centre for Policy Studies, in her role as minister for women and equalities, Truss said: 'To make our society more equal, we need the equality debate to be led by facts, not by fashion. Time and time again, we see politicians making their own evidence-free judgements.'

She also said discussion had 'been dominated by a small number of unrepresentative voices, and by those who believe people are defined by their protected characteristic and not by their individual character'.

We should all be chilled and insulted in equal measure by her comments, I know I am.

To argue that data based solely on age, disability and sex, amongst other things is not fit for purpose is ludicrous. More worryingly, it points to a government regime that seems to want to move away from important metrics like gender pay gap reporting. This would be a disaster and could set the hard-fought achievements of many, back by decades.

We celebrated 50 years of the Equal Pay Act this year. How did we do that? By announcing in late March that compulsory gender pay reporting would be suspended for the current year. It was a move that hardly made any waves at the time, as the UK was placed under lockdown, yet the announcement came just days from the filing deadline of 5 April, so most companies should have been ready to file. Those that did file, showed an increase gap of pay and bonuses. The situation is clearly getting worse, not better.

At the time I said that by taking the seemingly small step to alleviate the pressure on businesses, the chancellor had unwittingly given them the green light to put the gender pay gap to the bottom of the pile. It’s one thing to have the pandemic halt equality progress, but it now feels that Liz Truss wants to drive a coach and horses through the progress made in the last 50 years.

Despite the many challenges facing our society, as lawyers, we have a duty to hold the government to account on all issues that will impact the very fabric of our profession.

Dana Denis-Smith is founder of the Next 100 Years