In two months' time, Labour MP David Lammy will present to the prime minister the findings of his review into possible racial bias in the criminal justice system.

Lammy's final report will undoubtedly contain shocking figures in relation to the disproportionate number of black, Asian and minority ethnic people at all stages of the criminal justice system, some of which he has highlighted in his interim report. For instance, BAME offenders are more likely to face a prison sentence than a white offender for the same crime - a finding he is so shocked by, he mentioned it twice at a Royal Society of Arts event in London last week.

His recommendations will be intriguing in light of comments he made at the RSA.

He suggested communities playing a greater role in hearings involving young first-time offenders could help to rebuild trust in the system. He praised New Zealand's Rangatahi courts, where elders and community members take an active part in hearings and determining appropriate sentences for children who break the law.

But how feasible would it be to implement Rangatahi courts in this country? James Bell, founder and president of the W Haywood Burns Institute in the US, which works with communities to tackle racial disparities in the justice system, is cautious.

'How you do something about it, I'm wary whether there's the infrastructure and political will to make it happen,' says Bell, who met Lammy during a trip to the UK organised by the Centre for Justice Innovation, a legal thinktank. 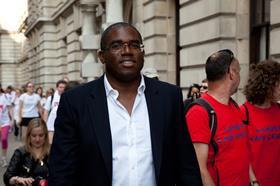 On infrastructure, Bell tells me justice in the US is administered at county level - local infrastructure, I imagine, would make it easier to adopt community courts than in England and Wales, where justice is administered through a national framework. I also imagine many would object to a model that could potentially lead to different sentences for the same crime depending on where the defendant lives.

Bell adds: '[Who] in this government, who in the charitable sector, who in the community, are the most impacted by Lammy's review, who are going to champion this work so it does not disappear?'

However, rebuilding trust does not always require overhauling national infrastructure.

In Baltimore, the Burns Institute examined why defendants weren't showing up for hearings. The cost of every bench warrant issued, the institute worked out, was $23,000.

Following conversations with the community, the institute came up with a simple idea: call the defendant the day before the hearing to remind them, just as doctors and dentists call patients the day before an appointment. The NHS in this country already has such a system, at least in my borough, where I receive a text the day before a doctor's appointment. In Baltimore, the number of bench warrants halved within three weeks of the idea becoming reality.

Bell says Lammy has identified the racial issues brilliantly and hopes the final report is a 'first step'. But if any of Lammy's recommendations are to stand a chance of becoming reality, political will is needed.