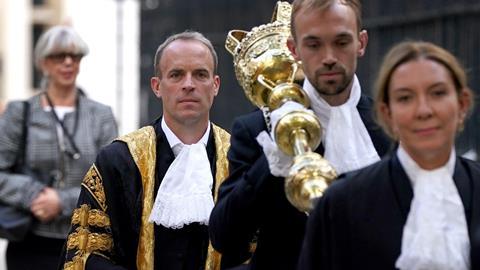 Dominic Raab may have only been given the justice brief a week ago, but he has already managed to demonstrate why extended court hours is terrible for parents.

The justice secretary and deputy PM was sworn in as lord chancellor at a ceremony in the Royal Courts of Justice that was supposed to start at 4pm.

Due to Covid, the ceremony was being livestreamed – which worked out well for me as I needed to pick up my daughter from school.

At 3.58pm, I logged on and waited patiently on my sofa for the ceremony to begin. At around the 4:05pm mark, I was distracted by a conversation taking place off-screen about someone near the back of the court who looked like they were setting up to record the ceremony (which wasn’t allowed).

‘Another 10 minutes,’ I heard someone in court say… at 4:13pm. I looked at the clock. ‘Uh-oh’, I muttered to myself, knowing immediately I wasn't going to be able to pick up mini-Moni at the time I said I would.

Finally, at 4.25pm, I heard the words I and my daughter really needed to hear 25 minutes earlier: ‘Make way for the lord chancellor!’

There was no explanation for the delay.

Ceremony ending at 5:06pm, I quickly put on my trainers and sprinted out my front door. Had I attended the ceremony in person, I would have had no chance.

In light of the government's decision to resurrect extended court operating hours (currently called 'temporary operating arrangements'), yesterday's events reminded me just how helpful the normal court sitting hours of 10am-4pm can be for parents of young children.

The government insists no one would be expected to work longer than they currently do under the alternative model. However, data published by HMCTS last year showed staff, judges and legal professionals who worked the afternoon session reporting arriving home later in the evening. A judge said the afternoon court was not equal to the morning court.

Lawyers may not necessarily be able to dash straight home/ to school as soon as court rises (for instance, they may need to speak to their client). But courts rising beyond 4pm can potentially see a child go from seeing mummy/daddy before bedtime to not seeing them until the following day.

As Dominic Raab’s swearing-in ceremony reminded me, when it comes to childcare, every minute counts.