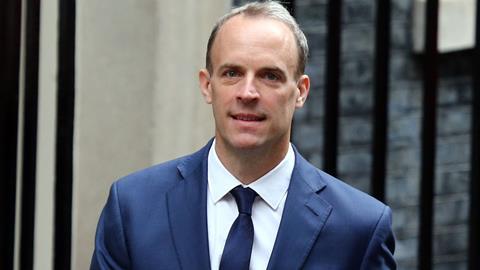 Dominic Raab’s first public pronouncement as lord chancellor was a curious one, not least because he seemed to be unsure which job he had taken on.

The second solicitor to hold the post, Raab promised to deliver on the prime minister’s commitment to ‘cut crime, reduce reoffending and protect the public’. All worthy ambitions, though perhaps more suited to a home secretary than a justice one.

There was no mention of protecting the independence of the judiciary and upholding the rule of law – the two most important tasks of a lord chancellor. This is not to say that Raab does not take this part of the job seriously, but the optics matter. Members of the legal profession and the wider public are concerned about the rule of law at home and abroad, and worried about media attacks on the judiciary, and they need a figurehead prepared to speak up for both causes. Let us hope this was merely an oversight by Raab.

While Raab’s move from the foreign office to the MoJ was largely portrayed as a demotion in the media, there is no less importance in his new role. There are huge issues unresolved in the justice sector, and the last thing it needs is another blink-and-you-miss-them minister.

It is difficult to say whether the justice system is in crisis – this suggests the situation cannot get any worse – but there are undoubtedly huge problems that need urgent attention.

The backlog across all jurisdictions is now at almost unmanageable levels, with delays getting worse in criminal, civil, family and employment tribunals. Trials are increasingly put off until 2023 and criminal lawyers are leaving the profession in their droves. The court modernisation plan looks compromised, the remaining court estate is in a parlous state, and there are shortages of judges following a year and a half in which hundreds have retired. There are legal aid deserts across the country and practitioners cannot be expected to continue on such meagre rates.

Raab must tackle this in addition to his responsibilities for prisons and to oversee promised reform of judicial review and the Human Rights Act (which he tried to repeal during his previous spell as justice minister).

More than anything, the justice sector needs a champion prepared to bang on the Treasury’s door and secure the kind of money that would make a real difference. The fear is that Raab is unlikely to be inclined to holding out the begging bowl, and might even accede to more cuts as the government looks for ways to fund its social care plans. After consistently blaming Covid-19 for the problems in the justice system, it was notable that outgoing lord chancellor Robert Buckland, writing in his resignation letter to the PM and freed from the shackles of following the party line, accepted that the legal sector is suffering from ‘years of underfunding’. We cannot afford to penny-pinch on justice any longer.

Without a fundamental change in how justice is financed, the identity of the lord chancellor is largely immaterial anyway. But Raab’s in-tray is bursting, and needs addressing immediately. Even if the media see his position as a demotion, it is vital he doesn’t.