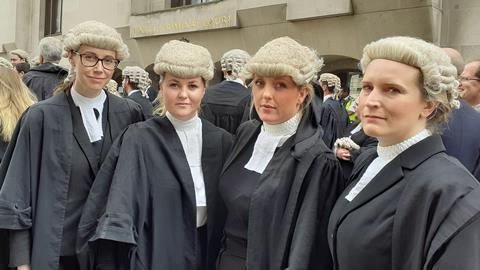 ‘I don’t think many people will feel barristers are particularly underpaid,’ Northern Ireland secretary Brandon Lewis told Sky’s Trevor Phillips on Sunday. Had those members of the public spent just a couple of minutes talking to one of the hundreds of barristers participating in a mass court walkout over legal aid funding on Monday, they would feel differently.

Criminal Bar Association chief Jo Sidhu QC wasn’t exaggerating when he told the huge crowd of lawyers gathered outside the Old Bailey in London that by the time a barrister comes home in the evening, they often have less money in their pocket than when the day started.

9BR Chambers’ Emma Heath tells me she is currently spending £162 on a return train ticket for a case. ‘I would not as a right get that money back. I have to apply to get it back.’

2 Bedford Row’s Jessica Ward says barristers (who, we shouldn't forget, are self employed) don’t get paid until the resolution of a case - yet they are waiting ‘literally years’ for trials to come to court.

Ward has a case where the offence allegedly took place in 2018. The trial should have happened in January 2021 but got pulled from the list. It was finally meant to start last week but was pulled from the list the Friday before and refixed for late 2023. Ward has spent many hours preparing the case but will not get paid until the trial has concluded. It is not just Ward who is affected – witnesses might have taken time off work to give evidence. 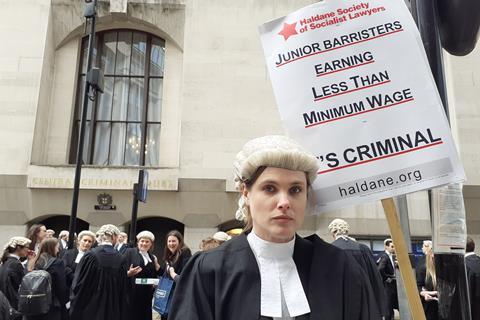 9BR Chambers’ Katie Mustard adds that barristers will be turning down work to make sure their diary is clear to cover the trial. If the case is suddenly pulled out of the list, they are left with nothing but an empty diary.

Doughty Street Chambers’ Laura Stockdale was living in London during her pupillage but could no longer afford to pay the rent and had to move back in with her parents.

She recalls a case she where there was an issue with the charge. Had it not been for the work she did, the defendant would have wrongly served a longer sentence. The case involved 10 hours' work, two hours' travel and four hours at court. 'We are making sure justice is done for victims and defendants,' Stockdale says. She was paid a grand total of £126. That works out at £7.89 per hour. The national living wage is £9.50.

Perhaps Brandon Lewis is right, perhaps many people don't feel barristers are particulary underpaid - but that's because they don't understand how legal aid funding works. With the media spotlight on the criminal bar's strike action, those on the picket line should grab every opportunity to reveal how much they are actually paid.