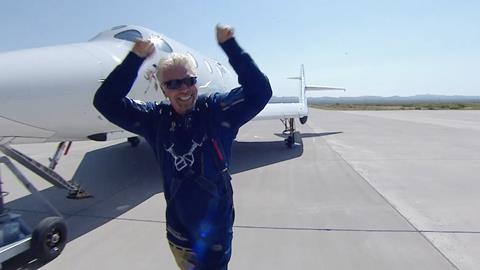 We Brits are ever ready to sneer at national successes, so it didn't take long for the commentariat to knock entrepreneur Richard Branson's expensive jolly aboard his Virgin Galactic craft Unity 22 yesterday. 'Richard Branson uses two planes to make 170km round trip,' one headline declared.

Some cynicism is of course in order, especially among fund managers invited to plough hard-earned cash into space tourism ventures. It is also worth noting that, contrary to some claims, Virgin Galactic is not the first commercial enterprise to fly a rocket plane above the atmosphere: that honour went to Bert Rutan's Spaceship One, back in 2004.

A more significant quibble may be whether, for all its 'Galactic' pretension, Unity 22 went in to space at all. This is a question that needs to be settled, and not just for the ego of a bearded billionaire.

Oddly, given that humankind has been spacefaring for some three quarters of a century, there is no binding international agreement on where space begins. This matters because the legal regime applying to 'outer space' is radically different to that applying in airspace. On national sovereignty, for example: under long-standing international treaties, principally the Chicago convention of 1944, states have 'complete and exclusive' sovereignty over the airspace above their territory. Thus flights by foreign aircraft can be barred entirely, ordered which routes to take, or required to land. Much of the aviation law that would-be pilots have to absorb for their first exam consists of procedures to make this absolute sovereignty compatible with routine international air travel.

On top of this, the Tokyo and Montreal conventions give states in certain circumstances jurisdiction over offences committed in foreign aircraft overflying their territory, even those 35,000 feet above the nearest national law-enforcement officer.

In space, by contrast, nobody can hear a cop or border guard scream. Article II of the 1967 Outer Space Treaty - the founding statute of space law - states that 'Outer space, including the moon and other celestial bodies, is not subject to national appropriation by claim of sovereignty, by means of use or occupation, or by any other means.'  Astronauts of all nationalities are 'envoys of mankind' (sic).

In a similar spirit, the treaty bans the stationing of nuclear and other weapons of mass destruction in space (adroitly, it declines to rule on the legality of nuclear-armed ballistic missiles just passing through outer space).

While the treaty is widely regarded as a success, its provisions and language mark it as a child of the 1960s, when spacefaring was limited to the state-sponsored activities of two superpowers, the US and USSR.

Today, the position is radically different, and not just because of the advent of joy-riding plutocrats. For a start, China: only the largest and most prominent of a new generation of space powers. Meanwhile, the most useful earth orbits are filling up with constellations of hundreds of commercial satellites. And the overt militarisation of space appears to be accelerating: chillingly, five nations now have the ability to destroy satellites in space, and such a move would presumably be the first strike of any future war between major powers. The resulting cascade of debris could render entire orbits unusable, with catastrophic consequences for satellite-dependent services such as navigation, communication and remote-sensing.

All this has prompted calls for a proper legal regime to govern human activities in space. Proposals for an International Outer Space Authority may be the stuff of idealistic dreams. But certain areas of potential conflict are open to resolution. One, which takes us back to Branson, is the basic question of where outer space begins. Without such a definition, surely all attempts at law-making are simply carving in the snow.

Today, almost every country in the world recognises the frontier as the so-called Karman Line, above which aerodynamic forces cease to have any practical effect. The Fédération Aéronautique Internationale defines this as 100km up. By this standard Branson's craft, which reached 86km, did not get into space. One country, however, adopts a lower standard: 80 kilometres, or rather 50 miles. That country is the United States, in whose airspace Branson's flight was conducted - hence his claim to have voyaged into space.

The reason for this bit of American exceptionalism is historical - at the height of the space race in the 1960s, it allowed the US to claim astronaut status for the pilots of the X-15 rocket plane, Unity 22's technological forebear. However the policy is unlikely to change.

American exceptionalism can be tiresome, but given that the choice of where space legally begins is arbitrary anyway - and, as Branson demonstrated, 80km looks and feels like space - would it not be sensible for the rest of the world to fall in to line? It would mean no loss of face to China or India, let alone Europe, in the space race, while creating a foundation for a firmer regulatory regime for the benefit of all. Even if it does entitle Branson to add another badge to his Buck Rogers suit.