We shall fight them in the courtrooms

For all the pyrotechnics and fury, the most dramatic moment in the summer blockbuster movie Dunkirk is the silent dedication at the end: to 'all those whose lives were impacted by the events at Dunkirk’. In other words, almost everybody. This makes the 1940 miracle an irresistible starting point for alternative histories, usually involving a Nazi invasion of Britain.

Here's one that doesn’t. Not because of the military difficulties but because, from Hitler’s point of view, invasion would have been unnecessary. Instead, it looks at some of the counterfactual events after a British surrender in autumn 1940, which the Law Society Gazette might have reported in a subjugated and starving Britain.

October 1940: the Law Society extends its congratulations to a former solicitor, the ageing David Lloyd George MP, on his second appointment as prime minister in the depths of a world war. The Gazette reports that, while the near-octogenarian is a shadow of the Welsh Wizard of old, his ‘Peace in Europe’ platform has cross-party parliamentary and popular support; moreover the esteem in which he is held by Herr Hitler will surely be invaluable in the difficult negotiations that lie ahead.

November 1940: the legal establishment notes with approval the signing of a formal armistice between the British Empire and the Third Reich, together with the opening of comprehensive disarmament negotiations. These are a necessary preliminary to the return of 400,000 British servicemen languishing in prison camps. It is more circumspect about the renewal of the Emergency Powers (Defence) Act 1939, questioning whether untrammelled powers of detention and confiscation are necessary in postwar Britain.

December 1940: More unease at the Order in Council on the status of foreign residents and newly naturalised citizens. The emergency coalition - which by now includes the new home secretary Lord Oswald Mosley of Rolleston on Dove - argues for an equivalent of the Vichy government’s ‘denaturalisation laws’ - rendering large numbers of people, mainly Jews, stateless. Writing in Peace News, the Marquess of Tavistock, founder of the British People's Party, accuses Jews of 'very serious provocation' because of their 'associations with commercialised vice, and by their monopolization of certain professions'.

With widespread shortages of food and everyday necessities, tough controls on immigration are overwhelmingly popular. As indeed are the gifts of chocolate, schnapps and cigarettes brought in by an SS battalion arriving in a spectacular mass landing of Junkers aircraft at Heston Aerodrome in a pre-Christmas goodwill visit. 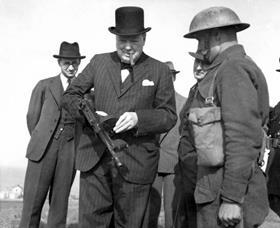 January 1941: Despite initial manifestations of goodwill all round, peace negotiations reach a stumbling block: The Nazi’s demand the British government pursue war crimes trials against those considered flouting with the Hague conventions on the conduct of warfare – essentially a ‘war guilt’ trial. On the basis of a widely circulated image posing with a sub-machine (tommy) gun, Churchill is named, as are air chief Dowding, former PM Neville Chamberlain and secretary of state for war Antony Eden. The 78 year-old prime minister begrudgingly delivers up his old friend and political sparring partner.

February 1941: Prominent barrister D.N. Pritt MP, author of Light on Moscow and defender of Stalin's show trials, brings prosecution at Westminster Magistrates’ Court. Churchill and the other defendants are accused, on the basis of their conduct from 1919 to 1940, of 'planning, preparation, initiation or waging of a war of aggression, or a war in violation of international treaties, agreements or assurances, or participation in a common plan or conspiracy for the accomplishment of any of the foregoing'. Pritt tells the court that these are understood to be crimes under international law.

The Gazette records their ruling that, whatever the position in international law, waging a war of aggression is not a crime in England and Wales. The doomed display of an independent judiciary states: 'We cannot justify the courts of England and Wales departing from the clear principle that it is for parliament to make such conduct criminal under domestic law.'

The government chooses not to comment. But the Communist Party's Daily Worker has no qualms: 'Enemies of the people,' screams a front-page headline. An appeal is unsurprisingly applied for.

April 1941: Filmed and recorded for the propaganda machine, the Court of Appeal, with a newly installed pro-German judge, sits. The process provides a platform for Churchill to state his own case and the case against Germany. The Gazette reports the change in German attitudes as the appeal descends into farce. Proceedings eventually collapse, but Churchill and the other defendants are relocated internment camps in Germany.

Luckily, none of this happened. Well, almost none of it: the lines in quotation marks were said, though not necessarily at that time. The exploitation of the incumbent judiciary to try its former governments also happened, but in Vichy France (read up on the Riom Trial). Perhaps Gazette readers have their own ideas of how, but for the miracle at Dunkirk, legal history might have turned out?