When lawyers feel scared to do their job, mob rule edges closer

These are the kind of headlines we would usually see from reports on unstable regimes where the rule of law is undermined.

But they are suddenly all too common in this country too. Yesterday Gazette columnist Joshua Rozenberg tweeted that lawyers (and doctors) representing Great Ormond Street Hospital in the desperately sad Charlie Gard case had been threatened. The judge in the case said the perpetrators of the threats will be dealt with ‘as severely as the legal system permits’.

It is hard to believe the hospital and its lawyers would have anything but the baby’s best interests at heart. The submission to this week’s hearing, from Katie Gollop QC of Serjeants’ Inn Chambers, is worth reading to get a sense of the pain all parties feel in this most difficult of cases. 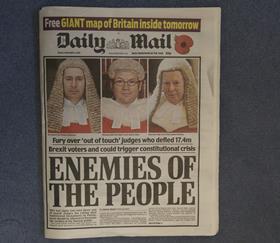 On the same day, veteran Labour MP Harriet Harman spoke out in protest at the government’s alleged interference in the prosecution of human rights firm Leigh Day.

Quite why the government - the defendant in claims brought by the firm - was allowed to have such regular contact with the Solicitors Regulation Authority is yet to be explained. It is worth questioning whether defence secretary Sir Michael Fallon should have used parliamentary privilege to make such sweeping statements about the conduct of the firm.

Certainly, no-one is saying lawyers should be above criticism or scrutiny. The public have every right to comment on cases and give their view on the ethics involved. Lawyers should be held to account for wrongdoing.

But there is a nasty sting to some of the invective language that circle high-profile cases at the moment, be they on complex medical procedures or Brexit, where judges had to seek police protection in the aftermath.

What can we do about it? Not a great deal. Public discourse in general has turned more sour in recent years, fuelled by social media and increased awareness (but not always understanding) of certain cases. Greater public legal education would be beneficial, while our politicians should take care not to stoke the fires either through ill-informed comment or indifference to over-the-top condemnation of judges.

But the simple reality is that in some case the rule of law threatens to give way to mob rule. When lawyers feel intimidated for doing their job, something is seriously wrong.