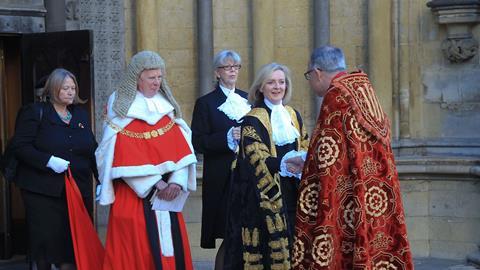 The lord chief justice has accused lord chancellor Liz Truss of failing to understand her constitutional role in the aftermath of the article 50 judgment.

Lord Thomas of Cwmgiedd, one of the three judges labelled ‘enemies of the people’ by the Daily Mail after the ruling in November, made an excoriating attack today on Truss’s response.

He said he understood why the lord chancellor held back from speaking up at the time, but criticised why Truss continues to hold she was right not to intervene more strongly.

Speaking to the House of Lord constitution committee, Thomas said: ‘I feel now under an obligation to say what I think. In short I believe the lord chancellor is completely and utterly wrong in the view she takes.’

He continued: ‘I don’t think it is understood how essential it is we are protected. It is clear after the article 50 judgment the claimant had been subject to quite a considerable number of threats and it is the only time in the whole of my judicial career I have had to ask the police for advice and protection.’

Thomas, who retires later this year, said he did not feel he was being controversial, especially after hearing circuit judges report to being called ‘enemies of the people’ by litigants in person.

He added: ‘I regret to have to criticise her as severely as I have but to my mind she has things completely and absolutely wrong and I am very disappointed. I can understand what the pressures were in November but she has taken a position which is constitutionally absolutely wrong.’

Thomas also lamented having had to write to judges in the last week to clarify the position over the adoption of recorded cross-examination in rape.

The lord chief justice said the Ministry of Justice announcement the idea would be rolled out across the country was a ‘complete failure to understand’ the practicalities involved.

Thomas added: ‘The problem is the ministry is under-resourced. They do not have enough people who understand.

‘There is a programme of gradually running down people with experience – they have all gone with one or two exceptions. There is this problem that the ministry simply does not have the proper staff to do the work [and] as a result it falls on [judges].’