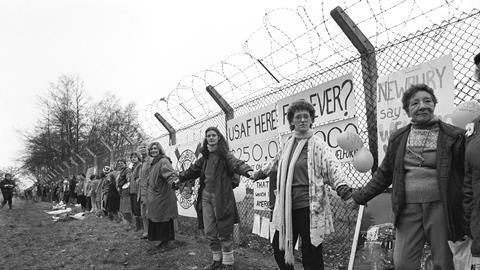 In 1981, a group of 30 women and children left Wales and walked over 100 miles to Greenham Common USAF base in Berkshire. They wanted to present a letter to the commander of the base, protesting against the planned storage of nuclear cruise missiles there. The women were afraid that the world was forgetting the devastating power of nuclear weapons, and the terrible effects that nuclear weapons had caused in Hiroshima and Nagasaki in 1945. 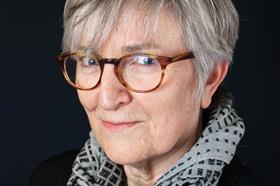 Once they arrived at Greenham Common they realised something more substantial than a letter was needed to make their point. They set up a peace camp outside the base, at first in caravans and tents, and then, when those were removed by bailiffs, in ‘benders’ – branches bent over and covered with large sheets of plastic. The women organised and publicised events and actions to draw attention to the issue. They blockaded the base, lay down in the road in front of lorries carrying the nuclear warheads, pursued night-time convoys, put sugar in the petrol. Their protest was always peaceful.

Their actions caught the imagination of the country, in particular women. Thousands of women from all over the country arrived to ‘Embrace the Base’. I was one. Women came from further afield, Europe and America. Some women came to stay, others for a day visit. It was a refuge for some, an education for others. My mum went to Greenham and had her first (and possibly last) cup of herb tea, sitting round the fire at one of the gates.

On New Year’s Eve, 1982/83, there was a mass break-in to the base and the women danced on the silos at midnight. As a result, they were arrested. What followed was a series of hearings at Newbury Magistrates’ Court, where the women were brought before the court for behaviour likely to cause a breach of the peace.

In 1983 I was a fresh-faced feminist, a young barrister and a member of the radical Wellington Street Chambers. I had come to the bar to work for women and I was delighted to be one of the lawyers instructed in this case.

The women knew what they wanted from the courts. They used the hearings as another arm of their campaign and continued their protest in innovative and moving ways – ways which we their lawyers were not privy to until the moment they happened in court. They read personal statements and self-penned poems. They carried out a citizen’s arrest on a senior member of the US Air Force called to give evidence. And they sang. At one hearing they presented their case by way of a Gilbert and Sullivan opera, one singing her position and the others joining in as a chorus. After a few minutes, the magistrates cleared the court and the women spent most of the hearing in the cells. The sound of their singing floated up into the courtroom.

We prepared a defence, using the Genocide Act 1969 – an act codifying conventions agreed after the second world war in 1948. The women argued that their protests – token, symbolic actions – were self-defence, carried out to prevent the crime of genocide, protecting themselves, their loved ones and the rest of the world from the use and effects of nuclear weapons. We called a Canadian scientist, who was also a nun, to give evidence on bomb-making; called a South African witness to talk about conditions in the uranium mines there; and the bishop of Salisbury talked about the history and effect of nuclear weapons and the moral case against them.

After the evidence and speeches, the magistrates made their decision. If a woman was found to have breached the peace, the magistrates then had to decide whether or not to ask her to be bound over to keep the peace in the future. If she refused, the only sanction was to send her to prison. The women were not going to stop demonstrating, so day after day, fearless women were thrown into jail. And indeed their plan was to crowd the prisons – many went to Holloway but were then dispersed to other women’s prisons. Moreover, the public was shocked at seeing reports that women were being transported to prisons. Like the suffragettes, they were making people think, causing an outcry, changing the situation.

After one group of women had been sent to Holloway prison, another group of supporters climbed some scaffolding and held up a peace banner on the prison roof. In the hearing that followed at Highbury Magistrates’ Court, the women called a Greenham woman in custody at the time and also a non-political prisoner, to talk about prison conditions. The magistrate found there had been a breach of the peace but decided they were unlikely to do it again and the women were released.

Later, some women snipped the wire of the perimeter fence and they were then charged with criminal damage; the case went to Reading Crown Court. Even later, they travelled to America to present an amicus brief on the legality of cruise missiles.

And so, were the Greenham women successful? Cruise missiles proper did not come to the UK.

Following the Intermediate-Range Nuclear Forces Treaty 1987, cruise missiles were flown back to the US in 1991/92. The government tried to say that it had nothing to do with the Greenham Women but I beg to differ. Indeed, the air base was closed in 1993. In 1997, Greenham Common was designated as public parkland.

Elizabeth Woodcraft is a barrister and author. Her most recent book is The Saturday Girls, published by Bonnier Zaffre