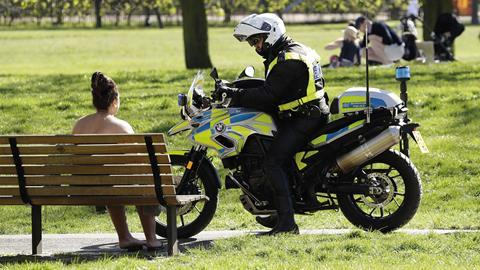 Is a UK daily death toll numbered in the hundreds distracting us from unjustified assaults on our rights and the responsibilities of government?

Liberty, the UK human rights body, has described the Coronavirus Act 2020 as ‘a drastic reimagining of state power’. Consider just a few of the changes introduced by the legislation, through 87 clauses over 329 pages:

All this went through parliament like a dose of salts. As the Labour party’s long-term adviser on electoral and parliamentary law Gerald Shamash, a solicitor, notes: ‘It was so important to get the legislation passed that there was not as much scrutiny as there otherwise would have been.’

This may be an exceptional piece of legislation to cope with exceptional circumstances. Yet the act has its critics. National disability charities are horrified by the prospect of local authorities ditching their duties to the vulnerable.

Meanwhile, criminal defence lawyers and a prominent jurist note that the police already feel emboldened to exercise power in an arbitrary manner.

Such concerns are rooted in experience. Councils have a track record of failing adults in social care and the conduct of the police is not always exemplary. Moreover, a decade of austerity has piled pressure on both, such that corners get cut – all critics of the act can cite real-life examples.

For a future history student coming fresh to this topic, it may come as a surprise that police powers were enhanced – and civil liberties restricted – by legislation that did not have its origin in the Ministry of Justice or the Home Office, but rather the Department of Health and Social Care. Public health seems to trump the justice remit.

But does this matter? ‘What we are seeing,’ Kirsty Brimelow QC tells the Gazette, ‘is police overreach, as each force interprets [these] vague and expansive regulations, and adds in government guidance, wrongly giving guidance a legal status. Everyone should wish to work together to stop the pandemic [and] save lives. But the police’s actions are damaging this purpose.’

Brimelow points to the publicised arrest and detention of a woman alone on a train platform, ‘for which the British Transport Police subsequently apologised’. The regulations, she stresses, ‘are for public health and not for public order’.

‘It might almost have gone unnoticed,’ Brimelow relates, ‘had it not been for the questioning approach of a journalist who contacted me about what happened.’

The police, she says, ‘need to inject far more common sense into their direction or they will lose cooperation from the public. As this isn’t happening, the DPP needs to be empowered so that over-zealous policing is quickly placed within a legal framework and criminal prosecutions are firmly established as a last resort’.

As for the public interest in extreme circumstances, she cautions: ‘The purpose of the lockdown is to reduce the spread of the virus. The actions of the police – unlawful as they were – didn’t achieve even this. They brought the woman into contact with a large number of people and placed her in an unsanitary situation in police cells.’

This was just one case, of course, but Brimelow’s concerns are shared by others. Red Lion Chambers barrister Timothy Kiely cites the breadth of the act. Section 51, he points out, confers new powers relating to ‘potentially infectious persons’, which are elaborated upon in schedule 21. ‘Taken at its widest,’ he notes, ‘that includes everybody.’

Perhaps the best-known example of police overreach so far relates to people exercising and walking pets in the Peak District. Derbyshire police were accused of ‘disgraceful behaviour’ by former Supreme Court judge Lord Sumption. He told BBC’s World at One: ‘This is what a police state is like. It’s a state in which the government can issue orders or express preferences with no legal authority, and the police will enforce ministers’ wishes.’

As for the conduct of local councils, adult social care and special educational needs give rise to other deep concerns. Here lies the potential for authorities to transform their ‘duty’ to provide services into a ‘power’ to help adults and pupils – if that is a power they wish to use.

On social care for adults, the National Autistic Society notes: ‘The new law allows councils to reduce their duties to provide care and support under the Care Act 2014, if they’re not able to cope with the effects of the coronavirus pandemic.

‘The guidance is meant to say when councils can stop supporting people or reducing people’s care. But it is really unclear.’

The society adds: ‘This is really worrying, because thousands of autistic people rely on care from councils to live safely – to eat meals, get dressed, exercise or keep in good mental health.’

In Shamash’s words, the Coronavirus Act ‘drives a coach and horses through the Care Act’.

Elements of the act could, if activated, require the assessment of one doctor, rather than the current requirement of two, to have a person ‘sectioned’ under the 1983 Mental Health Act. The Law Society’s head of public law Ellie Cumbo describes this as ‘quite extreme, should it become necessary’.

A spokesperson for the Department of Health and Social Care tells the Gazette: ‘In line with our legal duties we will continue to assess impact as we implement policies in the act, including when making secondary legislation or issuing notices or directions under the powers given by the act.’ But lawyers with clients who would be affected by local authority decisions in this area are not reassured.

‘The Coronavirus Act also weakens the fundamental rights of disabled adults, through removing the duties on local authorities to comply with their social care obligations to assess and meet disabled people’s needs, save where this is necessary to avoid breaches of human rights,’ explains Polly Sweeney, founding partner of newly opened public law-focused firm Rook Irwin Sweeney.

These so-called ‘easements’ can only be introduced following an individual decision by each council, made by its director of adult social care after liaising with local NHS bodies. Once introduced, a local authority would have the ‘power’ to meet social care needs but shed ‘duties’ on key points. These include the duty to carry out assessments of individuals’ and carers’ needs, the provision of detailed care plans, and the duty to meet the needs of someone assessed as eligible for care and support.

Sweeney notes: ‘There is real concern as to the accountability around such a serious decision and how local authorities will be monitored to ensure that human rights are not being infringed.’ In the context of austerity and resultant cuts to council budgets, this has rung alarm bells.

It is an area which the Law Society says demands close scrutiny, with Cumbo calling for more guidance.

The remedy for a wrong decision is, says Cumbo, inadequate. ‘The local government ombudsman won’t investigate any complaint that means the local authority would have to provide further information,’ she points out. People can complain only to the council with which they are in dispute on points of provision. ‘We will ask how government means to scrutinise ways in which local authorities are complying with their duties,’ she pledges.

Protections for children with special educational needs (SEND) are stronger, notes 39 Essex Street barrister Steve Broach. But they still require vigilance. ‘The [act’s] dilution of the SEND duties only takes effect if the secretary of state publishes a notice, which has to confirm his view that it is appropriate and proportionate to bring these provisions into force,’ says Broach. ‘There has been no sign of any such notice yet, so at present the duty to secure the education and health provision set out in each child and young person’s EHC [education, health and care] plan remains unchanged.’

Was The Coronavirus Act 2020 actually necessary? Would the Civil Contingencies Act 2004 (CCA) have sufficed? This is a point argued by academics and Gazette contributors Andrew Blick and Clive Walker. ‘The CCA addressed the widest range of possible eventualities,’ they point out. ‘Whether the Coronavirus Act is the best medicine is in doubt. Its model of emergency legislation contradicts the wishes of parliament’s better self as represented by the CCA.’

At issue, in particular, are the review safeguards the CCA includes. The review provisions of the Coronavirus Act 2020 include the House of Commons only. The CCA demands the House of Lords takes a role.

But the CCA itself is not uncontroversial. Shami Chakrabarti, former shadow attorney general, tells the Gazette she prefers the Coronavirus Act to the CCA as a legislative mechanism for meeting the challenges of the pandemic.

The Labour front bench was, she says, engaged early on and influenced the act’s content. She stands by statements made to Institute for Government director Bronwen Maddox on the eve of the vote on the then bill. ‘It intrudes into liberties that were hard won. It deregulates safeguards for a lot of vulnerable people.’

But Chakrabarti believes it was preferable to have the powers granted to national and local government marked as exceptional and time-limited. The opposition did not see a draft bill, she says, but the proposal that the act would be reviewed by MPs after two years was lowered to six months following meetings between government and opposition.

She also cites the facts that the act’s provisions are subject to judicial review and must comply with human rights principles (specifically the Human Rights Act 1998 and the European Convention on Human Rights) as advances on what was originally contemplated. ‘I am broadly in support, with a very heavy heart,’ Chakrabarti says. She says equality impact assessments must be carried out and made public to show the act’s impact.

We are at an early stage of seeking to judge if the concerns of lawyers with a sceptical skill-set will ultimately prove to be justified.  ‘We need transparency,’ concludes the Law Society’s Cumbo, ‘to make sure the rule of law is not endangered.’ As laws and constitutional traditions that have been tested in wartime are tested in a pandemic, she adds, the legal profession must embark on ‘a quest for precision’.