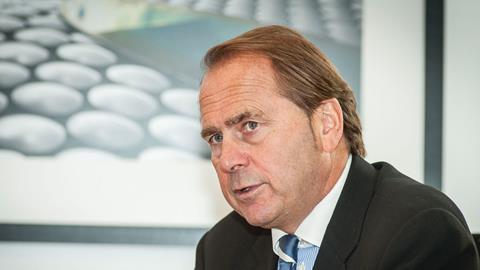 Michael Ward set his sights on a career in accountancy but made legal history instead, reports Jonathan Rayner.

Gateley chief executive Michael Ward rarely gives interviews. ‘We are only a few months into a four- or five-year journey,’ he says. ‘I’m not going to reveal commercially sensitive information about our plans for the coming years.’

Ward admits he was a ‘little surprised to have been first by the finishing post’ in the public flotation stakes. The ‘cachet’ of the London Stock Exchange (LSE) is a ‘good endorsement’ of the firm’s financial soundness, he maintains.

But we race ahead. How did Ward get where he is today, leading a quoted firm with 11 offices in three countries, a headcount of 622 and annualised income of around £64m?

His reply is surprising. ‘It almost didn’t happen,’ he says. ‘I did A-level maths at school and had my sights set on a career in accountancy. By the age of 26, I was one of 13 articled clerks in an accountancy firm – but the only one without a university degree. I thought I might be missing a trick and, because I particularly enjoyed the law section of the accountancy foundation course, I signed up for a three-year law degree at Birmingham University – even though I’d already been accepted at Manchester to do maths.’

Any regrets? ‘A good accountant will always earn more than a bad lawyer and vice versa,’ replies Ward. ‘It’s important to do what you’re best at.’

Upon graduation, he trained in the Birmingham office of what is now international firm Pinsent Masons, qualifying in 1984. Some three years later, he was approached by Gateley to set up a corporate team, again in Birmingham, building it from just a trainee and himself to its present headcount of over 60. He became a partner in 1988, senior partner in 2001 and famously led an IPO on the Alternative Investment Market (AIM) in June 2015 that raised £30m.

‘We were aware that there is a history of professional services firms not proving successful after going on to the stock market,’ he reflects. He instances accountancy group RSM Tenon, which joined the market in 2000 but fell into administration in 2013.

‘We took a hard look at their experiences,’ he says. ‘There was no obvious point of failure, but some common trends that they all shared. One was that their level of debt was too high. We kept debt at Gateley to only £10m, which is quite manageable on an expected turnover of  around £64m. There were no doubters within the business. The partners were united in resisting the opportunity to borrow more money from the banks.’

Ward stresses the importance of a water-tight lock-in agreement, in Gateley’s case one that lasts for five years, in ensuring that the firm retains its long-term value after an IPO. This is important because a law firm is a people business, with its most important asset being the skill of its partners and other fee-earners. If these key players were to depart shortly after the IPO, then the value of the business would fall rapidly.

Gateley partners have no opportunity to realise the notional value of the shares they hold by selling them during the lock-in, which gives investors confidence. Ward says: ‘All 81 selling partners signed up. We had to be all in it together, because the IPO was the start of the journey, not the end. No other professional services firm coming to market has signed up to so long a lock-in. The industry standard was 12 to 18 months, with a no-dealing clause. We signed up to a clawback of shares and money for anyone leaving the agreement before the five years had passed.’

Ward and Co. were accidental trailblazers, it seems. ‘It was never part of our business plan to be the first mover,’ he replies, ‘but it does have its advantages. It has raised our profile by differentiating us in the marketplace. It has also fuelled the level of press coverage, which is far greater than we anticipated. The cachet of launching on the LSE led to increased interest from overseas investors in the US and Europe.’

Who are these investors? ‘There are 21 institutional investors,’ Ward replies, ‘the main ones being Schroder Investment Management and Miton Asset Management, who subscribed for 8% and 5.6% stakes respectively. One client, who was introduced by a broker, invested £3.8m, which is north of 10% of the £30m funds raised overall. The float was an institutional placing and so members of the public were unable to invest directly in the IPO then – but they can now.’

KNOWN FOR: Led Gateley LLP to a pioneering stock market flotation in 2015; won the accolade of Law Society Gazette Legal Personality of the Year at the 2015 Law Society Excellence Awards

Is it very different, being managing director of a PLC? ‘I’m still learning,’ he replies. ‘We only floated on 8 June 2015. It’s very much business as usual, growing the business for existing partners and shareholders. We need to be open and honest with the marketplace and make it a priority to deliver in accordance with expectations.’

It would certainly seem that the strategy for growth announced by the firm in a statement issued at the time of its admission and first day of trading on AIM is already bearing fruit. The directors, the statement read, believe that the AIM listing will provide: greater opportunities to grow Gateley both organically and by selective acquisition; the opportunity to acquire businesses offering complementary professional and other business services; alignment, through share participation, of employees’ goals with those of the business, aiding retention of staff and adding to Gateley’s recruitment appeal; and facilitating a more flexible career structure, further widening Gateley’s appeal in the employment market.

Ward’s career, the Gazette notes, has been rooted in Birmingham throughout. Has he ever thought of relocating? ‘Birmingham is a strong legal centre,’ he states. ‘Lots of major firms have set up offices here. HSBC has relocated 2,000 employees here and Deutsche Bank is making a similar move.’

Indeed, the city is undergoing a renaissance. Its new £189m library opened in 2013 and is the only attraction outside London in the UK’s top 10 tourist hotspots. The Grand Central retail development around the main New Street railway station opened in September 2015 and the revived tram system began running last month.

The attractions of Birmingham, where house prices are lower than London and the countryside is close, make recruitment easier, Ward says.

How do Ward and the firm engage with the wider community? He replies that he is chair of the trustees of the Birmingham Big Art Project, which is a charitable organisation set up to build an iconic piece of public art that will resonate with the city and attract visitors in the same way that the Angel of the North, the Statue of Liberty and a sculpture of a mermaid have become identified with Gateshead, New York and Copenhagen.

‘We like the idea of putting Birmingham on the national and international art map,’ Ward says. ‘The first phase is a competition open to artists worldwide. Their brief is to do their homework and devise a piece of art that exemplifies the spirit and history of the city.’

The art work will be sited near the proposed HS2 railway station and so will be the first impression that many thousands of visitors have of Birmingham. Ward continues: ‘As a firm, we are ideally placed to advise donors in relation to legal and governance issues around the project’s charitable aims. To demonstrate our support, we donated £20,000 to the project straight after the IPO.’

Ward also founded and chairs the Midlands Corporate Finance Charity Ball Committee, which has held an annual dinner for the last 14 years to which lawyers, accountants, bankers and financial advisers are invited. Each ball raises funds for that year’s chosen charity – such as leukaemia research or a charity that gives children with life-limiting diseases an especially memorable treat.

The firm also has a corporate social responsibility programme, with the whole firm voting on which national charities to support and each regional office voting on a local charity. ‘The Birmingham office organised a bake-off cake competition on behalf of the Alzheimer’s Society,’ Ward recalls. ‘And one of our solicitors volunteers at Citizens Advice. We encourage volunteering. Our solicitors develop skills and competencies that they bring back into the business.’

Drawing the interview to a close, the Gazette returns to the hot topic of the moment. Is Ward aware of any other firms considering an IPO? ‘There could be another IPO next week or never,’ he replies. ‘I just don’t know. Inevitably, there must be some firms looking at their options and others watching carefully how things go with us. We’ll have to wait and see.’