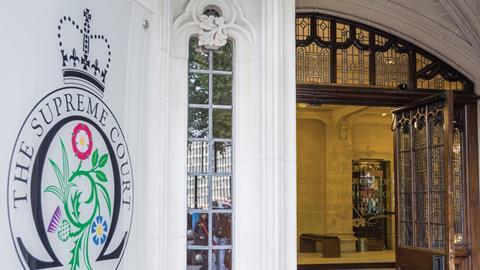 The Inner House of the Court of Session had made a direction in respect of determining whether a claimant for personal independence payment under the Social Security (Personal Independence Payment) Regulations 2013 had needed ‘prompting’ or had needed ‘social support’ to be able to engage with other people face-to-face, so as to attract greater weight in his assessment of needs. The Supreme Court, partly allowing the Secretary of State’s appeal, held that what had brought the claimant into the category of requiring social support rather than that of prompting was that, to be able to engage with others, he needed that support to come from someone trained or experienced in assisting people to engage in social situations and, further, that that support was not limited to cases where the claimant had needed social support actually during the face-to-face engagement.

*MM v Secretary of State for Work and Pensions

The respondent (MM) had made a claim for personal independence payment (PIP) relying upon the effects that his mental health had had upon his ability to engage with other people. His claim was refused because he had not been awarded the required points pursuant to the Social Security (Personal Independence Payment) Regulations 2013, SI 2013/377 (the regulations) attributable to the activities that he had been able to carry out. MM was assessed in respect of his ability to engage with other people face-to-face, pursuant to activity 9 in Pt2 of Sch 1 to the regulations. He was found to have required ‘prompting’ to be able to engage with other people, within descriptor 9b, rather than requiring ‘social support’ to be able to engage with other people, within descriptor 9c, which attracted more points. The First-tier Tribunal (Social Entitlement Chamber) (the FTT) held that the decision-maker had been correct so to find. The appellant Secretary of State appealed to the Upper Tribunal (Administrative Appeals Chamber) (the UT). The UT allowed the appeal and remitted the case to the FTT with directions as to how the FTT ought to approach activity 9. The appellant appealed to the Inner House of the Court of Session (the IH). The IH held that the critical distinction between descriptor 9b ‘prompting’ and descriptor 9c ‘social support’ lay, not in a difference in the nature of the help provided, but in the fact that, with social support, there had been a necessity for the help to have come from a person trained or experienced in assisting people to engage in social situations. Accordingly, the IH directed the FTT to carry out a formulation to the effect that encouragement or any other sort of prompting could qualify as social support if, to render it effective or to increase effectiveness, it was required to be delivered by someone trained or experienced in assisting people to engage in social situations. The appellant appealed submitting that the IH’s direction generated confusion between those that required support from a person because of their relevant experience and those who required support from a friend or family member, and that there was a qualitative difference in the helper using his training and experience as opposed to help provided by a friend or family member. Further, the appellant submitted that the social support had to be contemporaneous with the social engagement being supported.

(1) Whether encouragement by way of ‘social support’ to be able to engage with other people, for the purposes of descriptor 9c, needed to be given by a trained or experienced person by reason of their training or experience.

It was inherent in the scheme that, broadly speaking, descriptor 9c reflected a greater degree of disability than descriptor 9b, so attracting increased points. Responding to a greater degree of disability required the attention, not just of another person, as in the case of promoting, but of ‘a person trained or experienced in assisting people to engage in social situations.’ That was what differentiated prompting for the purposes of descriptor 9b from prompting that was social support for the purposes of descriptor 9c. Where the support took the form other than prompting, it would similarly only qualify for 9c if the claimant needed it to have come from a person so trained or experienced. Applied in the family/friends setting, to qualify for points under descriptor 9c, the claimant had to need support from someone who was not just familiar with him, but who was also experienced in assisting engagement in social situations. It was the training or experience of the helper upon which the claimant had depended in order to enable face-to-face engagement with others to take place, not simply the close and comforting relationship that might exist between the claimant and the helper. What brought the claimant into 9c rather than 9b was that, to be able to engage with others, he needed that support to come from someone trained or experienced in assisting people to engage in social situations (see [33]-[35] of the judgment).

(2) Whether the social support needed to be contemporaneous with the face-to-face engagement being supported.

There was nothing in the wording of descriptor 9c, or the definition of ‘social support’, to require actual presence of the support during the engagement, nor to require that the support was timed to coincide with the engagement, rather than being provided in advance, or afterwards. The requirement that there ought to be a current need at all relevant times did not, of itself, exclude the possibility of assistance given outside the confines of the engagement itself. Accordingly, descriptor 9c was not limited to cases where a claimant needed social support actually during the face-to-face engagement (see [43], [44], [46] of the judgment).

The appeal would be allowed in the limited sense of the slightly different interpretation of the relevant legal provisions from that of the IH (see [49] of the judgment).

Samantha Broadfoot QC, Julius Komorowski and Leaon Glenister (instructed by the Office of the Advocate General for Scotland) for the Secretary of State.