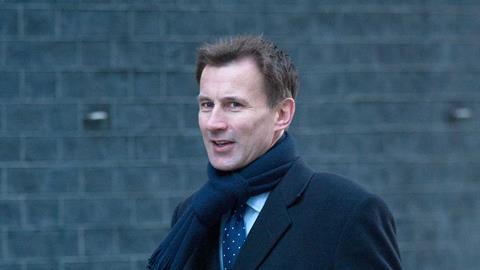 After consulting in summer 2015 on the principle of fixed costs, the Department of Health said the scheme will be mandatory for all claims worth up to £25,000, to save the NHS in England £45m a year by 2020/21.

The consultation will last for 12 weeks and will also address wider issues affecting clinical negligence litigation, including the use of experts and Civil Procedure Rules.

Hunt said: ‘It’s important that when significant mistakes happen in the NHS, patients are able to have an open dialogue with a trust about what went wrong, receive reassurance of what is being learnt, and can discuss what form of recompense or redress may be appropriate. Legal action should only be part of this process.

‘Unfortunately, what we often see in lower cost claims is a deeply unfair system where unscrupulous law firms cream off excessive legal costs that dwarf the actual damages recovered. We believe this creates an adversarial culture of litigation, which is inflating insurance premiums and drawing away resource from the NHS at a crucial time.’

In the consultation, the government makes clear its plans to not affect the claimant’s entitlement to compensation or overall amount of damages awarded.

Full rundown of the figures

The consultation puts forward a number of options for the level of fees: one proposal sets costs for claims at pre-issue at £3,000, rising to £7,150 for claims that are post-listing. Trial fees are in addition to the figures and a 10% reduction is proposed for early admission of liability.

Another method involves adding a percentage of damages to fees, with costs for claims post-listing restricted to a maximum of £22,070 where damages are £25,000.

Costs will receive a 12.5% weighting if the case is being run in London.

The issue of introducing recoverable fixed fees for medical negligence cases has been discussed for many years. Calls intensified after an increase in the number of these cases following restrictions on personal injury claims.

The government says costs for clinical negligence cases are excessive and can far exceed the value of the claims themselves.

Claimant lawyers say obstructive behaviour from defendants means costs escalate, and warn that meritorious claims will be impossible to run if fees are fixed.

There had been speculation in the last two years that the DoH would look at applying fixed costs to claims worth as much as £250,000. Minutes from the Civil Procedure Rules Committee meeting last July, revealed in October, suggested the threshold was being brought down to £25,000.

The consultation paper said following discussions with interested parties it was decided the upper limit should be set at the level currently applied in other categories of personal injury.

It is unclear how the clinical negligence cap would work alongside the fixed recoverable costs scheme being reviewed by Lord Justice Jackson. There are also questions about a forthcoming probe by the National Audit Office into how the NHS Litigation Authority runs cases.

Patient safety charity Action against Medical Accidents (AvMA) has said the government is wrong to press ahead with plans without waiting to see the evidence or considering the implications.

‘We are deeply disappointed that, against our advice, the department has pressed ahead with these proposals without even waiting to learn about the impact of earlier reforms which are reducing costs; what the NAO has to say about the role of the NHSLA; or what Lord Justice Jackson’s review has to say about fixed costs,’ he said.

‘We would never condone solicitors claiming over-the-top legal fees, but this is very rare and is already controlled by the courts.

‘The NHS Litigation Authority is also able to challenge costs where there is a case for doing so. In our experience, high costs are usually a result of the NHS not investigating incidents properly and dragging out claims with unreasonable denials of liability. However, it seems the department has taken no account at all of defendant behaviour unnecessary escalating costs.’

The Medical Defence Union, by contrast, voiced dismay that the fixed costs limit will be lower than it had hoped.

Dr Matthew Lee, professional services director, said: 'The original pre-consultation by the Department of Health proposed introducing fixed costs for claims up to £250,000 which would have had a more immediate impact on disproportionate legal fees seen by the NHS and medical defence organisations. Lord Justice Jackson is conducting a more wide-ranging review of costs for all personal injury claims with an upper limit of £250,000 and we have submitted our proposals for fixed costs to that review.

'In the longer term we need root-and-branch reform of personal injury law to address the rising cost of compensation claims themselves, which are reaching unsustainable levels.'