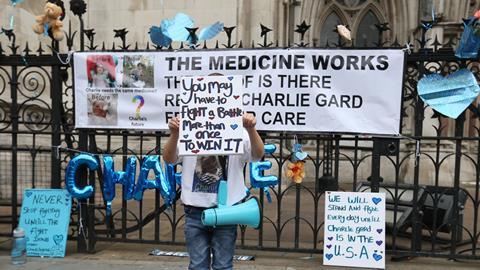 Legal aid reforms cannot have been intended to leave parents struggling to access legal representation in cases similar to that of terminally ill baby Charlie Gard, the judge ruling in the case said today in an unusually outspoken intervention.

Ruling in Great Ormond Street Hospital v Constance Yates, Christopher Gard and Charlie Gard, Mr Justice Francis, said it was not for judges to make political points. 'However, it does seem to me that when parliament changed the law in relation to legal aid and significantly restricted the availability of legal aid, yet continued to make legal aid available in cases where the state is seeking orders against parents, it cannot have intended that parents in the position that these parents have been in should have no access to legal advice or representation,' he said.

This afternoon Gard and Yates ended their legal challenge to take their son to the US for experimental treatment. Charlie suffers from mitochondrial depletion syndrome, a rare genetic condition.

In today's judgment, Francis thanked lawyers involved in the high-profile case, singling out the parents' lawyers for acting pro bono.

Francis said: 'To most like-minded people, a National Health Service Trust is as much an arm of the state as is a local authority. I can think of few more profound cases than ones where a trust is applying to the court for a declaration that a life-support machine should be switched off in respect of a child.

'Mercifully, Mr Gard and Ms Yates have secured the services of highly qualified and experienced legal team whose lawyers have been willing to give their services pro bono. I am aware that there are many parents around the country in similar positions where their cases have been less public and where they have had to struggle to represent themselves. I cannot imagine that anyone ever intended parents to be in this position.'