Family solicitors today urged the government to extend civil partnerships to couples of the opposite sex after the Supreme Court ruled in Steinfeld and Keidan v Secretary of State for International Development that there was no justification for the ongoing discrimination since legislation was introduced allowing same-sex couples to marry. 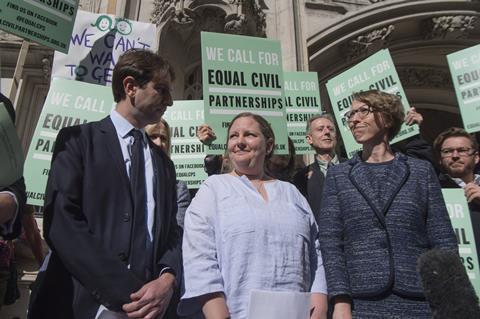 Rebecca Steinfeld (centre) and Charles Keidan outside the Supreme Court in London with their solicitor, Louise Whitfield.

However, Rebecca Steinfeld and Charles Keidan's solicitor, Louise Whitfield, a partner at London and Bristol firm Deighton Pierce Glynn, said her clients 'very much hope that the government will now act immediately and extend civil partnerships to different-sex couples.

Following the ruling, a Government Equalities Office spokesperson said: 'The government is very aware of its legal obligations, and we will obviously be considering this judgment of the Supreme Court with great care. We recognise the sensitive and personal issues involved in this case and acknowledge, as the Supreme Court does, the genuine convictions of the couple involved. We will study the court’s judgment carefully and respond in due course.'

Hazel Wright, a partner at Lincoln's Inn firm Hunters Solicitors, said the Supreme Court Court 'is spending a great deal of time reviewing family law issues in light of various societal changes. Today's decision perhaps implies that there is a mood for reform'.

However, Alexandra Bishop, family lawyer at London firm Kingsley Napley, warned that campaigners will need to continue to lobby the government for law reform to open up civil partnerships for all couples rather than phase them out. 'As the Supreme Court has quite clearly pointed out, a declaration of incompatibility does not oblige the government or parliament to do anything,' she added.

Graeme Fraser, chair of family law group Resolution's cohabitation committee, repeated his call for the government, as a priority, to introduce basic protections for unmarried, cohabiting couples. 'In the shorter term, government should act to combat the widespread belief that rights are gained through "common law marriage" and encourage unmarried couples to take out a cohabitation agreement, enter into declarations of trust to regulate property ownership and make wills to reduce the risk of unfairness and poverty for unmarried partners who separate or are left bereaved, and their children,' he added.