Leveson: Do we want Premier League or a non-league criminal justice system?

The senior judge in charge of criminal justice has declined to comment on the action being taken by a growing number of criminal barristers in protest against the government's legal aid reforms. But Sir Brian Leveson, president of the Queen's Bench Division, has strongly suggested funding may be the cause of a declining number of defence solicitors.

Leveson, delivering the Criminal Cases Review Commission annual lecture in London on Wednesday, said criminal practice is no longer seen as an attractive career choice. He cited the Law Society's heatmap, which predicts there could be an insufficient number of duty solicitors in the next 10 years to help those investigated for or charged with a crime, and said many chambers are not taking on new tenants to do criminal work. 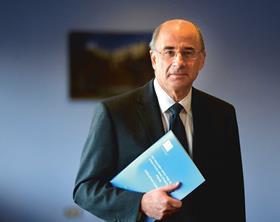 On Monday the Criminal Bar Association and circuit leaders said no one wanted to take the latest action over the ‘unprecedented financial assault' currently striking the criminal justice system. 'We want to recruit juniors from all backgrounds. We want them to sustain a practice. We want to be fairly paid for the work we do. We do not want anyone who has talent, learning and commitment to leave because of the dire financial constraints of our work,' they said in a joint statement.

Leveson said: 'Funding is at the core and although I do not comment on the present issues between the profession and the Ministry of Justice, if we are to maintain quality standards now and in the future, it is critical that this work must both be seen to be, and must actually be, an attractive career option for practitioners entering the legal profession.'

Failure to reverse the current situation will have 'long term and detrimental consequences for the pursuit of quality criminal justice', Leveson warned. This would 'inevitably' affect the commission's work 'as failures in the system are exposed, far too late'.

He continued: 'To revert to my football metaphor, what is it that we want of our criminal justice system: premier league, championship or non-league? We all want premier league quality and results.'